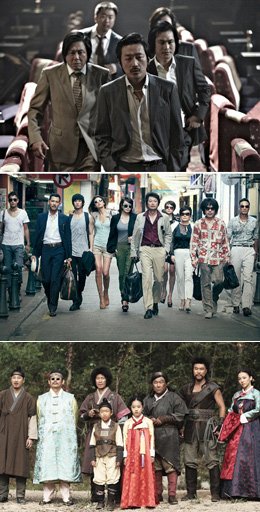 A series of successful domestic films at the box office hints at the changing face of Korean cinema. "The Thieves", which was released on July 25 amid great expectations with its heist movie plot and star-studded cast, has attracted almost 10 million viewers in only three weeks. "The Grand Heist" also drew one million moviegoers earlier this week despite its lack of rave reviews.

In total, 18 Korean movies have now drawn more than one million viewers each so far this year, compared to 16 over the same period in 2011 and 13 in 2010. So what is the driving force behind this trend?

Local moviegoers used to prefer comedies or action movies, but these days their interest is spread more evenly across the genres. Although romantic comedies and melodramas were in the past regarded as unlikely to score a huge hit at box office here, "Everything about my Wife" and "Architecture 101" attracted more than four million viewers each this year. Meanwhile, "Unbowed", a courtroom drama based on a true-life incident, proved its commercial success by selling 3.42 million tickets.

"Ten years ago, moviegoers were divided into two distinct types: people who like Hollywood movies, and those who like Korean movies. But as many people have become familiar with a variety of genres of American movies and dramas, local audiences tend to prefer domestic films that contain elements of Hollywood genres tailored to Korean tastes", said film critic Jeon Chan-il.

"The Thieves" has 10 lead actors, while "The Grand Heist" has 11. Even melodramas and romantic comedies, which used to rely on one leading actor and actress, now often have three or four actors in starring roles. At the same time, it is increasingly common to see major stars play supporting roles.

"In the past, many viewers were attracted to movies based on their plot, but now they like character-oriented movies with a good story. Movies that have many leading characters or supporting characters with distinct personalities are also getting popular", said Kim Ho-sung, CEO of production company REALise.

As producers have raised the target age group from teenagers and people in their 20s to those in their 30s and over, movies are naturally attracting a more diverse audience.

The combined number of spectators in their 30s and 40s now far outstrips those in their 20s, and this demographic can be seen as playing a leading role in Korean movies' raging success at home.