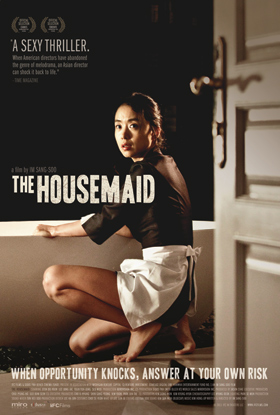 Being released by IFC Films, director Im Sang-soo's "The Housemaid - 2010" will be in U.S. theaters Jan. 21 and on demand Jan. 26.Per IFC, the Korean film is "a stylish, sexy thriller about an innocent young woman caught in the twisted web of a rich family's games". It was shown in the official selection at the Cannes and Toronto film festivals in 2010.

Storyline provided on the distributor's website reads: Eun-yi (Cannes Best Actress winner Jeon Do-yeon of "Secret Sunshine") is hired as a nanny in an lavish mansion by businessman Hoon (Lee Jung-jae) and his very pregnant wife, Hae-ra (Seo Woo). When Eun-yi is seduced by the father of the house, she becomes the unwitting victim in a series of traps laid by the women of the house-Hae-ra, her villainous mother (Park Ji-young), and their seemingly loyal but increasingly bitter housekeeper (Youn Yuh-jung). Intensely erotic and fiendishly entertaining, "The Housemaid - 2010" builds to an unforgettable climax as Eun-yi must outwit them and escape their schemes to protect her sanity-and her life-from the vicious family.