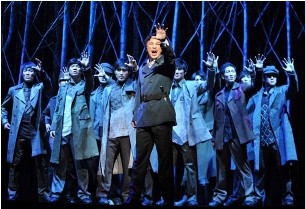 Chronicling the life of early 20th century Korean independence patriot An Chung-gun, Hero: The Musical will make its American debut at New York's Lincoln Center for a limited engagement from August 23 to September 3. The production was well received when it premiered in Korea in 2009.

The American debut will commemorate the 61st Anniversary of Korean independence and the 100th anniversary of An's death. UN Secretary-General Ban Ki-moon and a host of UN Ambassadors are planning to attend.

Hero: The Musical, presented by ACOM International, won numerous awards in Korea and is now receiving international attention as one of the first Korean Broadway-style musical to be presented overseas.

An is known for his independence activism during the occupation of Korea by Imperial Japan in the early 20th century. On October 26, 1909, he assassinated the Japanese Resident-General of Korea, Ito Hirobumi, who had earlier signed the Eulsa Treaty granting Japan the right to annex the Korean peninsula. During his trial under the Japanese colonial authorities, An explained why he felt his actions were justified and his vision for peace in East Asia. He was subsequently executed and is remembered in Korea as a patriot.

The production is directed by Ho Jin Yun and casts Sung Hwa-jung as An Chunggun, Sung Gee Kim as Ito Hirobumi, and Mi Do Jeon as Lingling.

For more information or to purchase tickets, visit the production's official website.