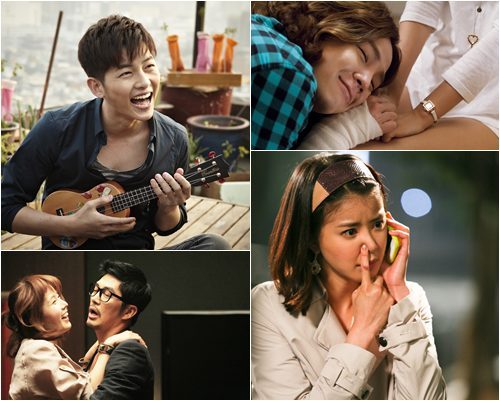 The results of recent Korean romantic comedy movies are not that good.

After the craze for "Arrow, The Ultimate Weapon" and "Silenced" passed by this summer, there was a spill of romantic comedies, showing the sweet affection between lovers. Despite the fact that October and November is off-season for theaters, these films threw their hat into the ring with the excuse that the cold weather would give a reason for lovers to spend their time watching movies.

The Korean Film Council announced on November 21st that "Couples", which was the first of the recent romantic comedy movies release, ended with a total of 8,655 viewers. It was beat by "Punch" and "Real Steal" and has recorded a total number of 348,907 admissions up until today.

"You Pet" and "Penny Pinchers", which were released last weekend, are also not faring much differently. Starring Kim Ha-neul from "Lovers of 6 Years" and "My Girlfriend is an Agent" with Jang Keun-suk, "You Pet" stopped at 87,572 audiences last weekend. It has about 400,000 accumulated admissions.

Current 'it' guy Song Joong-ki and Han Ye-seul star in the movie "Penny Pinchers" but the results so far have also not been much different. The weekend brought them 62,831 audiences, but its total is only 310,000. "Perfect Partner", which was well publicized because of Kim Hye-sun's risque performance, was also poorly attended, with only 34,282 admissions.

The box office ranking shows "You Pet" in 5th, "Penny Pinchers" in 6th, "Perfect Partner" in 8th, and "Couples" in 12th, all having been pushed aside by "Punch", "Immortals" and "Moneyball". It looks like there is no chance for them to enter Top 3 as the reservations for this week thus far again favor the higher ranking movies.

"Korean romantic comedies crash"
by HanCinema is licensed under a Creative Commons Attribution-Share Alike 3.0 Unported License.
Based on a work from this source