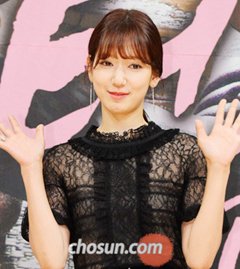 A fan meet with actress Park Shin-hye scheduled on Sept. 10 in Shanghai has been canceled amid fears of anti-Korean sentiment amid an escalating spat over the stationing in Korea of a U.S. Terminal High-Altitude Area Defense battery.

Beijing believes the battery is intended to keep its military might in check, and there is talk in China that the Korean Wave has turned into a "Korean Chill".

A spokesman for Amore Pacific, which organized the event, said Wednesday, "We were told by Park's agency yesterday to postpone the event. They said there was no choice due to anti-Korean sentiment and animosity toward Korean entertainers" since the decision to deploy a THAAD battery here.

Park rose to the top of the search on Weibo recently when her new hit series "Doctors" started.

She was set to visit Shanghai next month as the poster girl for Amore Pacific's Ryo shampoo brand. But her agency has been inundated with messages of concern from Chinese fans after it was publicized on Chinese web portal Baidu.

"Chinese fans voiced concerns about the actress's image should she visit China at this point", the spokesman said. "We'll try to hold the event later when things calm down".

Appearances by several Korean stars like Song Joong-ki, Kim Woo-bin and Bae Suzy have been canceled since the spat escalated in June.

"Korean Star Cancels Fan Meet in China Amid THAAD Spat"
by HanCinema is licensed under a Creative Commons Attribution-Share Alike 3.0 Unported License.
Based on a work from this source