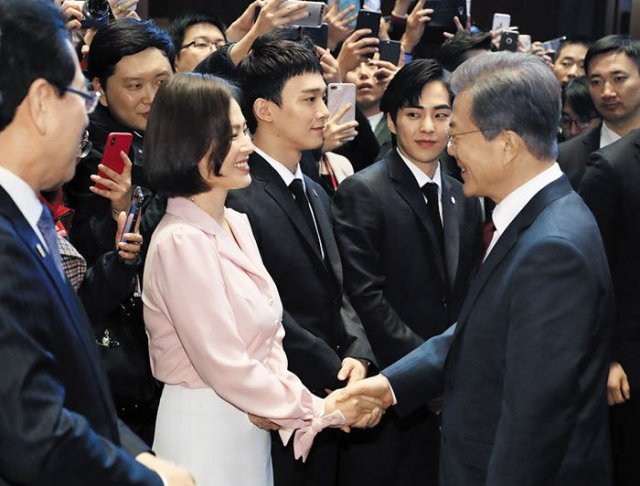 Actress Song Hye-kyo shakes hands with President Moon Jae-in (right) at the opening of a business fair in Beijing on Thursday. /Yonhap

Korean stars came out on force to support President Moon Jae-in during his state visit to China.

Song Hye-kyo and Choo Ja-hyun and her Chinese husband Yu Xiaoguang as well as professional volleyball player Kim Yeon-koung joined Moon at the opening of a business fair in Beijing on Thursday.

Choo and Yu were also present at a dinner the previous day with Korean residents in Beijing.

Song starred in the 2016 hit drama "Descendants of the Sun", which was hugely popular in China, while Kim now plays for a pro volleyball team in Shanghai. 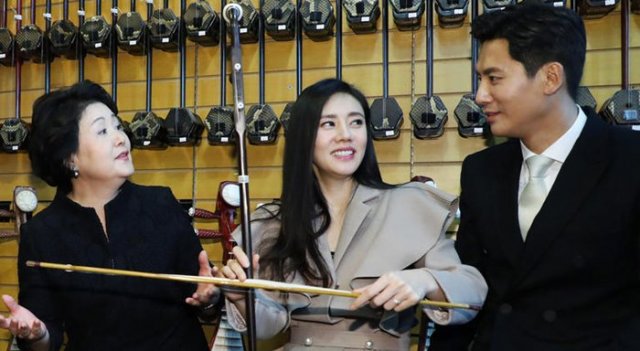 First lady Kim Jung-sook talks with Choo Ja-hyun and her Chinese husband Yu Xiaoguang in a music store in Beijing on Wednesday. /Yonhap

EXO-CBX, a sub-unit of K-pop boyband EXO, also joined Moon at the event, while Choo and Yu accompanied first lady Kim Jung-sook on a visit to a music store in Beijing to try her hand at playing a Chinese bowed instrument called erhu.

It is unprecedented to see celebrities participating in so many events during a Korean president's trip abroad. The move is aimed at appealing to the Chinese public by tapping into their popularity there.

"Korean Stars Support Moon on China Visit"
by HanCinema is licensed under a Creative Commons Attribution-Share Alike 3.0 Unported License.
Based on a work from this source