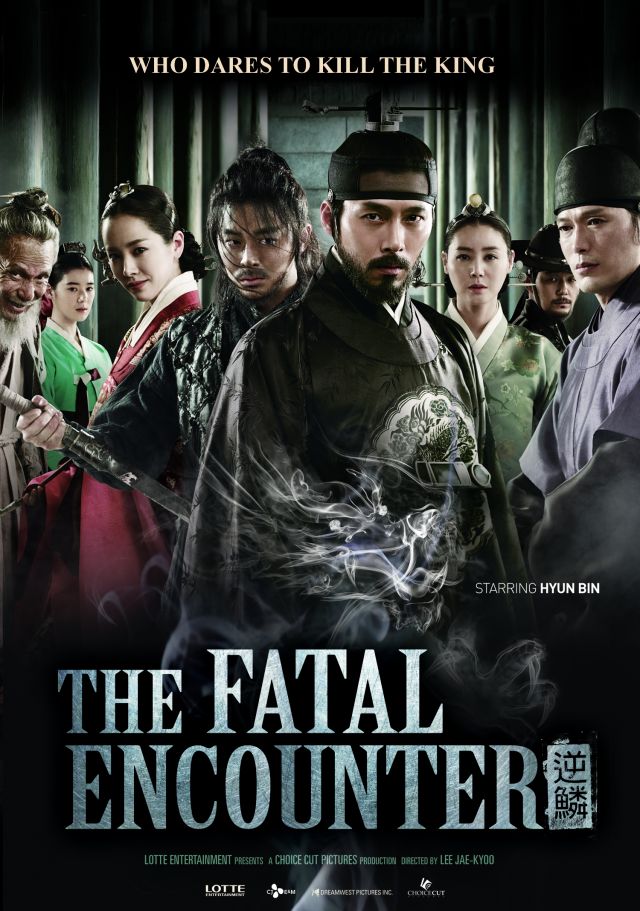 Prologue
"The Fatal Encounter" is focusing on the story of politically embattled King Jeong-Jo (nicknamed the King of Misfortune), his dedicated servant Sang-chaek, and nefarious courtiers and assassins.

Synopsis
As the year 1777 opens, King Jeong-jo enters the second year of his reign, which is consistently under threat from the opposing Noron and Soron factions. To successfully defend his royal power, Jeong-jo draws upon his stores of courage and relies heavily on his loyal servant Sang-chaek. In a shocking twist, Sang-chaek turns out to be an assassin who was sent into service in order to kill Jeong-jo. After witnessing King Jeong-jo's capacity to justly rule the people, however, Sang-chaek comes clean about his true identity, and is banished from the court. As he leaves the palace, however, his eye catches sight of Sal-soo, the deadliest assassin in Joseon. Sang-chaek frantically returns to the court, only to find Sal-soo locked in combat with Jeong-jo.

Production Note
South Korea's Biggest Star Hyun Bin Makes His Grand Comeback
Hyun Bin ("Secret Garden", "My Name is Kim Sam-soon") takes on his first acting role since completing his mandatory military service. He plays King Jeong-jo, whose reign was fraught with political conflicts and threats upon his life. The actor prepared extensively for his first historical role and has drawn accolades for his dedication. Going into production almost Immediately upon being discharged from the army, he studied the arts of sword fighting, archery, and horseback riding for the role. Jung Jae-young ("Welcome to Dongmakgol"), Jo Jung-suk ("The Face Reader"), and Han Ji-min ("The Rooftop Prince"), a group of South Korea's most treasured character actors, star alongside Hyun Bin.
"The Fatal Encounter" : Inspired by Historical Events "The Fatal Encounter" is based on the real-life assassination attempt on King Jeong-jo (1752-1800) on the night of July 28th, 1777. On that fateful night, Jeong-jo was unable to sleep and tried to soothe his mind by reading late into the night. When he suddenly heard a sound in the ceiling, he quickly called his servants to investigate. To their shock, they captured an assassin hiding in the eaves. That night's assassination attempt became one of the most infamous in the 500-year history of the Joseon Dynasty (1392-1897).

The King of Misfortune - King Jeong-jo (Hyun Bin)
Jeong-jo was the 22nd ruler of the Joseon Dynasty. As a young man, he was forced to witness the slow death of his father Crown Prince Sado, who was effectively executed by being placed in a wooden box by a royal decree from his grandfather King Yeong-jo. After Jeong-jo ascended the throne in 1776, he was caught in the fierce factional strife between the Noron and Soron power bases throughout his reign and continuously subject to threats to his life and palace intrigue. Despite these circumstances, Jeong-jo remained in power for almost 24 years and is noted for having carried out significant and innovative reforms.

The King's Shadow - Sang-chaek (Jung Jae-young)
King Jeong-jo's trusty servant, Sang-chaek was hired at a young age to manage the king's personal library. Since then, Sang-chaek has steadfastly been by Jeong-jo's side through many life-threatening situations. Although Sang-chaek was originally sent into palace service in order to get close enough to kill Jeong-jo, after witnessing Jeong-jo's true heart, he changes his allegiance and decides to protect Jeong-jo at all costs.

Deadliest Assassin in Joseon Dynasty - Sal-soo (Jo Jung-suk)
Raised as a cold-blooded killer at a secret assassin society, Sal-soo is Joseon's deadliest assassin. He eliminates his targets with ease and leaves no trace behind. Though at first he hesitates to take on task of assassinating King Jeong-jo, Sal-soo strikes a deal with his master that would set him free from the secret assassin society.

Venomous Conspirator - Dowager Queen Jeongsun (Han Ji-min)
Dowager Queen Jeongsun is King Yeong-jo's second wife from the Noron faction and played a major role in influencing the execution of Crown Prince Sado, King Jeong-Jo's father. She is one of the major co-conspirators in the assassination attempts against Jeong-jo.

"Korean Super Star Actor Hyun Bin's Much Awaited Comeback Period Film "The Fatal Encounter" Hits N. American Theaters May 23rd!"
by HanCinema is licensed under a Creative Commons Attribution-Share Alike 3.0 Unported License.
Based on a work from this source