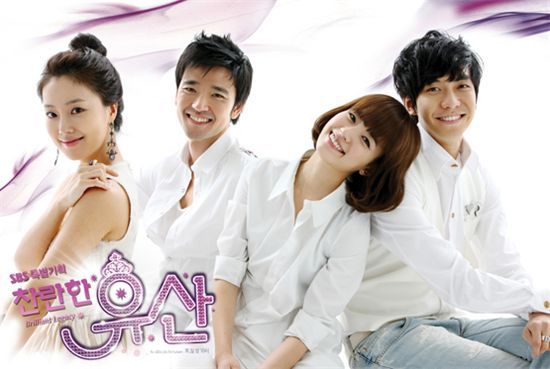 Fuji TV's program "Hallyu Alpha" (Mon-Fri 2:07~3:00), which started airing on January 11 in hopes of creating 'a new Hallyu generation', has been receiving positive feedback. Back in 2004, Fuji TV had arranged a program called "Saturday Hallyu Wide Hour", airing dramas such as "Stairway to Heaven" and "Sad Love Story" but had cancelled it due to low ratings. This time, "Hallyu Alpha" tried to differentiate itself from other programs by playing uncensored versions of dramas, providing bilingual broadcast (in Japanese and Korean) and adding special features such as exclusive interviews with the cast and behind-the-scenes footage. MBC TV series "My Name is Kim Sam-soon" kicked off the program, followed by KBS' "Women in the Sun" in February.

Viewers responded to the show somewhat later -- "Shining Inheritance", starring Lee Seung-gi and Han Hyo-joo, made bigger splashes than expected during its month-long run in March. According to local media reports, the premiere episode of "Shining Inheritance", broadcast on March 2, scored a mere 5.3 percent in viewership ratings. But the figure constantly climbed, peaking at 9.7 percent on March 24 and the final episode aired on March 30 scoring a rating of 8.0 percent. Considering that the average viewership rating around 2 p.m. on weekdays -- which is when "Hallyu Alpha" airs -- is approximately four to five percent, the figure is the highest among all the dramas that have aired in the same time slot for the past ten years. Rumor has it that local television executives were very surprised by the ratings for "Shining Inheritance". Lead actors Lee Seung-gi and Han Hyo-joo made headlines when they visited Japan in time with the show's airing in the country. Han, who plays the female lead Go Eun-sung, was particularly showered with attention as her telecinema movie "Postman to Heaven", co-starring TVXQ member Kim Jae-joong, had also opened in Japan.

Many fervent viewers poured out their comments about the show on the viewers' board for "Shining Inheritance". And it is worth noting that a majority of these viewers were high-school students and young people in their twenties and thirties. This is quite unexpected because in the past, Hallyu fans were mostly composed of women in their forties. This could be because "Shining Inheritance" was broadcast in March, overlapping with spring break for students. As the Japanese school year starts in April with the spring break in March, it was possible to lure middle school, high school and college students on their school breaks to the front of television sets. For "Hallyu Alpha", it is encouraging that they turned the younger generation -- who had previously thought that "Hallyu is just something that older ladies like" -- into Hallyu drama fans.

"Hallyu Alpha" has been showing medical drama "New Heart" since April 1, after which MBC TV series "Last Scandal", starring actor Jung Joon-ho and the late actress Choi Jin-sil will air. With Korean blockbuster "IRIS" (starring Lee Byung-hun and Kim Tae-hee) and "Hard To Say I Love You" (starring Kim Jae-joong) lined up for the second half of the year, can it be said that the new generation of Korean Wave has already begun? We hope that "Hallyu Alpha" will build a strong foundation for the new round of Korean Wave.

"Korean Wave: The New Generation"
by HanCinema is licensed under a Creative Commons Attribution-Share Alike 3.0 Unported License.
Based on a work from this source