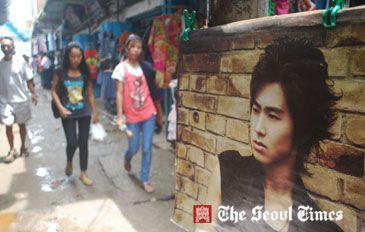 Ms Viola Rainam hurriedly fed her children that evening. "There will be electric power from 6:00pm  9:00pm today. I have to watch the Korean movie 'Stairway to Heaven'", she says. Like Ms Rainam, people glued to their television screens every evening watching the Korean DVD movies if there is power supply. Despite irregular power supply which comes hardly 2-3 hours a day or alternate days, their spirits are never dampened and people always make it a point to watch and finish the Korean serial movies which continue for days together.

There is a foreign invasion taking place in India's Northeast region. But the invasion is not from neighbouring countries like China or Bangladesh. This time round, it is a cultural invasion. Oflate, the Northeastern states have been experiencing a shift in cultural assimilation from western Americanise ethos to Korean and Japanese culture.

The Rainam's family lives in Ukhrul, a picturesque hill district of Manipur state in India bordering Myanmar. Not to talk of Ukhrul alone, there is a craze for Korean movies in Indian states bordering China, Bangladesh, Mynamar or Bhutan.

Korean movies  "Full House", "Boys over Flowers", "My Girl", "Green Rose", "Stairway to Heaven" and you name it, a 10-year old boy or girl would recall what movies he/she had watched. Talk about the favourite actors or actresses, they youths who sports the hairstyles of these Korean heroes and heroines would name Rain, Lee Min-ho, Kim Beom for actors and Song Hye-kyo, Lee Da-hae, Jang Nara, Ku Hye-sun, etc and say 'Sarange' which means 'I love you'

Korean culture is spreading like wild-fire across the North East India. Everything that's Korean is selling hot. Korean culture ranging from soaps, music, food, movies. Markets flooded with Korean DVDs, sometimes pirated sold at 100-200 Indian Rupees. Every home has not less than 20 DVDs. The rooms of young people are adorned with posters of Korean actors. Koreans ethos has taken over hearts and homes of many families. The demand for Korean soaps, cinema, fashion and language is at a new peak.

"I don't like my teenage son to sport the spiky hairdo with coloured fringes and coming to church", says Ms Khaiwonla, a school teacher in Ukhrul district though she is also addicted to watching Korean serials. Dressed in skinny pants worn on the buttocks and trendy tees; spiky hairdos or a thin threatlined hair with coloured trimming down the temples  the kind that Korean heroes and heroines sports, you can never identify whether they are really Koreans.

The rise of the Korean Wave in India particularly in the Northeast region of India is a unique phenomenon. The 'wave' has reached the shore of Northeastern region of India, particularly Nagaland state a since 2007. The wave hit stronger after the first ever Korea-India Music Festival was held in Kohima in 2008 under the joint partnership of Nagaland government and the South Korea government. In 2009, the Korean singers, wrestlers and even Korean food featured during the Hornbill festival, a gala yearly event at Heritage in Kohima. Naga boys and girls belted out Korean songs.

Why people in Northeast India have easily assimilated to Korean culture while Indian culture is just at their doorsteps? Perhaps this question is seldom asked. "The people here could never identify with the soaps shown in Hindi entertainment channels", Theja Meru, cultural promoter and president of the Arirang TV Club in Kohima says. Korean language is being taught in a weekly class for Arirang TV fan club members in Kohima.

This is true. Hardly anybody from the northeast has featured in Indian soaps. "This may be because of physical similarities between the Koreans and the northeasterners who are mostly of Mongoloid stock. People find Solace in Korean entertainment because of the likeness in physical appearance", M Naorem, a Manipuri film maker opines. Another factor might be attributed the ban of Hindi movies by militants in the northeast. "Korean TV got a boost when militants in the northeast banned Hindi movies", says Aso Shimray, a freelance journalist. However, had there been no physical similarities between Korea and the tribal of Northeast India, the wave may not have much impact to attract customers. The Korean Wave is therefore, the result of a star system and new entertainment management firms that have a strong appeal to the audience.

On the other hand, as one of the most popular cultural discourses among Asians, the Korean Wave has certainly created a new set of cultural symbols in this region. The Korean government has combined this cultural symbol with economic development. It is clear that the Korean government has been trying to foster the ties apparently, for economic benefits through promoting cultural industry. According to Jung Sang Won, cultural attaché at the Korean embassy in New Delhi, the money that the country makes from its DVDs and TV 'exceeds in millions' besides cultural promotion.

South Korea has 400 companies in India. In 2003, trade ties between the two nations stood at $ 5 billion rose to 15 $ billion in 2008. The Korean government's next target is the Northeast India. In 2008, the Nagaland government inked a deal with CONA International, a Seoul based company that sought to place Naga youth in Korea for jobs both skilled and unskilled.

The Korean wave has moved beyond a fad and is here to stay. But the cultural boom has helped the Koreans in two ways  promotes cultural ties and business deal follows.
__________________

Ngathingkhui Jagoi serves as special contributor for The Seoul Times. Previously he worked with four newspapers. Now based in Nagaland, northeast India, he is assistant editor of Northeast Window magazine. He earned his BA in English and a diploma in journalism from North Eastern Hill Univ. in India He also writes short stories and features on culture and rural reports. He will also author a book titled as "Grandmas' Treasure",a collection of Naga folklores to be published by National Book Trust of India, New Delhi.

"Korean Waves Reach India's NE Homes"
by HanCinema is licensed under a Creative Commons Attribution-Share Alike 3.0 Unported License.
Based on a work from this source