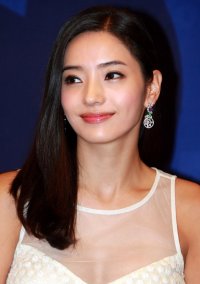 Han Chae-young is aptly named the "Barbie Doll" of Korea.
But nowadays, it's not just her looks that have got people talking. Instead, the actress is garnering rave reviews for her work in the television drama, "Always Cheerful Choonhyang"!

A present-day version of the historical movie, "Chunhyang", critics doubted the series would succeed. But the work has proved a favorite among young adults. Han was at the core of this success, playing a fun-loving, free-spirited young woman.

Though the actress may seem, at first, stand-offish, she tells Showbiz that she's quite similar to her character in "Chunhyang". The role - no surprise - fit her like a glove.

Han debuted in 2000 in the movie, "Recording". She then appeared in the low-budget movie, "Bet on My Disco", playing an innocent young girl in love. In "Wild Card", she starred with actor Yang Dong-geun and released, you could say, her wild side, playing a sexy detective. Her work last year in "Beijing, My Love" was her first as a lead. But the joint Korean-Chinese production did not perform as well as people expected.

But with the success of "Chunhyang", Han is, nevertheless, heavily in demand by producers and fans.