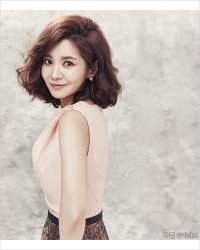 Her bright brown eyes shine bright with her passion for acting, bewitching audiences from Korea to China. An actress whose performance makes people laugh and cry - For Star Focus in 2006, the vivacious Jang Seo-hee was our first guest!!

Across Asia, Jang's popularity has steadily grown, opening new doors of chance for her. She was invited to star in the Chinese TV drama, and the actress went to the mainland to participate in the international press conference.
The media gathered in close, trying not to miss a thing! The coverage had been "hot" since news of the drama was released.

"Miss Mermaid", the Korean TV drama that made Asia's audience fall in love with Jang Seo-hee. It's a production that could never be overlooked in her career.
She had worked tirelessly in the drama and her hard work was not in vain. It brought her recognition as one of Korea's most talented actresses.

After "Miss Mermaid", the offers continued to pour in. Jang challenged herself on television to the silver screen. She didn't have a moment to catch her breath.
In the film, "Ghost House", she joined Cha Seung-won and played an unusual role, once again enticing her audience.

It almost seems like she was shot to stardom overnight, but that is definitely NOT the case. Her perseverance and tenacity brought her successful results, and Jang Seo-hee is grateful for that. She shared some advice with her junior actors.

She debuted in 1989 as a fledgling actress and has retained determined aspirations to this day. Jang still clings to the passion she had during her years as a rookie, letting it help lead the way into her future.

Not only is this star big in dramas and film, she's sought after constantly by marketers, for commercials and various advertisements. Even beyond Korea! Fans adore her and we're sure her male fans are curious to hear about Jang Seo-hee's IDEAL MAN.

The support of her fans has allowed her to stand as a star and Jang makes sure to share as much time as she can with them. She was all smiles during her last autograph signing event, making eye contact with each individual.

Jang will be greeting fans in the New Year with a new movie! As well as starting her journey with a pan-Asian cast in an upcoming Chinese TV drama! We hope to see fantastic results and good luck to the actress Jang Seo-hee in 2006.