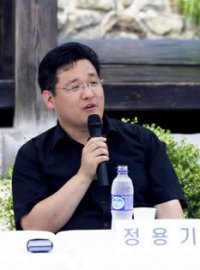 JEONG was born in 1970. Graduating from Hanyang University majoring in Film and Theater, he was director, editor, and cinematographer for a short film "Over the Memories" which drew much attention from festivals. His feature debut, "The Doll Master", was acknowledged by both critics and audiences for its charming horror items and plot. He also worked on the screenplay of the female-cop-comedy, "She's on Duty"