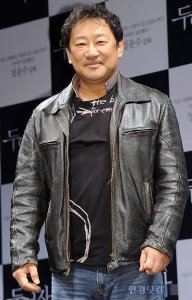 Born in 1962, Jung Yoon-soo attended the Hankuk University of Foreign Studies, obtaining a degree in Spanish. After graduation, he worked for Cheil Communication, Korea's premier advertising agency. Later, after spending time in New York studying film and media, Jung returned to Korea and began working in the film industry by writing the treatment for "Out to the World" and working as the assistant director for its production. Later, he wrote the screenplay and was assistant director for "Hair Dresser" and wrote the original script for the sci-fi animation film "Wonderful Days". He is also an avid musician, who can be seen playing bass in "Yesterday"'s Malacca Bar scene.