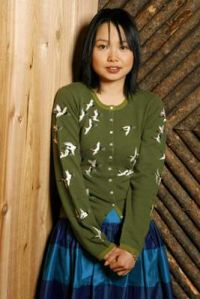 Jiseon Kim, age 21, was born and raised in South Korea, then immigrated to the US in 1999. She currently attends the Parsons School of Design in New York, majoring in Communication Design.

When she was a girl, Jiseon dreamed of becoming an actress, but her strict parents encouraged her to study something practical. After she was approached by So Yong to be in the film, Jiseon could not believe her luck. It was a chance for her to pursue her dream of becoming an actress. Her parents were not so easily convinced. So and Brad had to get a letter of recommendation from Sundance programmer Trevor Groth to convince them that they were legitimate filmmakers. After finally agreeing to let Jiseon do the film, her parents then asked if Jiseon should get cosmetic surgery on her teeth and nose to be in the movie.

Jiseon currently has one dimple, which is a result of a childhood accident. When she was five she fell down some stairs and landed with side of her face on a nail. It bruised badly then turned in to a dimple. Her parents still can't believe their good fortune that Jiseon got such a cute dimple for free. They want her to do the other side.