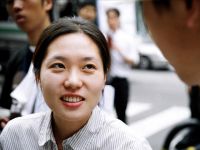 Kim graduated from the Department of Theater and Film in Hanyang University, and studied film directing at KAFA. With her short Rabbits and Bears, she received the Grand Prix at the Busan International Short FF as well as the Best Director Award at Henri Langlois FF, and was invited to the Clermont-Ferrand International Short FF, BFI London FF. She was selected to join SIWFFs Pitch&Catch with her script Heat Wave. Her first feature, "Nothing or Everything", was invited to the 36th Torino FF and the 57th Ann Arbor FF, receiving positive reviews from critics.