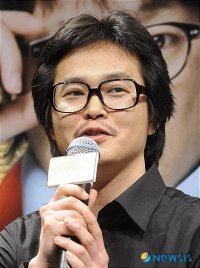 Born in 1974, LEE graduated from Dankook University, majoring in film. He also studied at the Korean Academy of Film Arts. He is the director of two short films "Bath House Yong-san" and "Can I Love You?" that received numerous film awards at foreign and domestic film festivals. In "Bath House, Yong-san" , he delicately shows the faint hope and warm smiles in the shabby life of a bathhouse worker. "Can I Love You?" won praise for finely expressing the subtle sensibility between a man and woman. Bewitching Attraction, his feature debut film is based on his screenplay that received the Grand Prize under the title "Jealousy is a Battle!" in KOFIC's 2003 Script Contest. LEE is renowned for his distinctive directing style that humorously shows the subtle emotions of tranquility in his short films. He continues to pursue his own style in this full-length film. He is a director who knows the joy that comes from the moment his directing perfectly corresponds to the audience's response, and he will continue to communicate with audiences through this film.