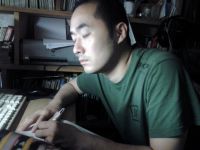 Born in 1975 in Seoul, Lee Sang-cheol got his degree in Drama and Cinema from Hanyang University then graduated from Korean Film Academy. He built his career working as assistant director for Lee Myung-ses "Duelist" and "M" (2007). After making a few short films such as "Fuzz" and "Near Future", he directed his feature "Metamorphosis"(2009).