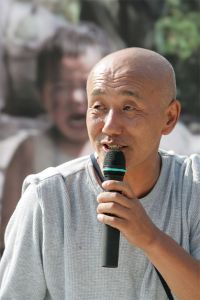 He is a very well-known director for stage plays. He has directed over 20 plays in total and has been awarded Best director, Director of the year, as well as other honors throughout Korean Art Awards. He has directed "To be dried and worn" out and this play was highly praised by containing such humor and wit with both popularity and artistry and as a Comic play first ever staged on at National theatre. "The Bridge at Nogunri" is his very first debut feature film.