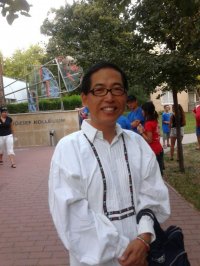 He has a MFA in Directing for Theater, Video and Cinema at CalArts. His short, Visitor (2002), got the audience award in Busan Asian Short Film Festival. A musical short, 24 (2005), was invited to Jecheon International Music & Film Festival. Autumn Sonata is his first feature.