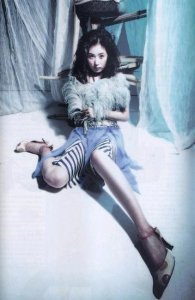 Moon So-ri is the wife of Jang Joon-hwan.
Moon is one of Koreas most accomplished actress best known for her acclaimed leading roles in Oasis (2002), A Good Lawyers WIfe (2003), and Forever the Moment (2008). Most recently, Moon has dabbed into a comedy role in The Spy: Undercover Operation (2013), revealing a light-hearted side of her acting repertoire.