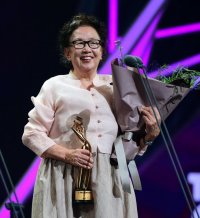 Na Moon-hee is the aunt of Jung Won-young.
Na has had a prolific acting career in television and film spanning more than five decades. She was acclaimed for her supporting roles in the films "Crying Fist", "You Are My Sunshine", "Cruel Winter Blues", and Harmony. Na also appeared in the TV dramas "The Wang Family", "Rascal Sons", "Mom is Acting Up", "Five Fingers", "High Kick!", and "Famous Princesses". From the year she started her acting career in 1961, Na won the Bo-gwan Order of Cultural Merit Award in 2012.