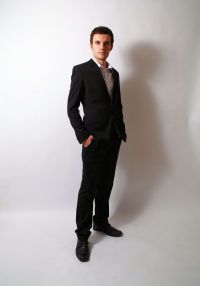 Paul Stafford was born in Blackburn, England to Robert Stafford a postal service worker, and Lorna Tomkins, a secretary for the NHS. Paul has a younger sister named Rachel.

The 59″ star grew up in the sleepy town of Clitheroe, where he volunteered at the local cinema in order to watch movies for free. Whilst here, he eventually learned to be a projectionist, before moving away after enrolling at Warwick University. At Warwick he became immersed in theatre, having never had the opportunity to act before, he immediately began acting in theatre productions and small movies, and taking a job at the universitys theatre and cinema complex.

After a year in Mexico and 6 months in India working as a writer, Paul decided to move to South Korea for acting experience. It was here that he took on a number of roles on television and film. His first film role being 2 lines in My Black Mini Dress (2011), going from there to take the lead role in the independent movie Marks Festival.

Pauls next step will be to move back to his native England to conquer the industry there.

He is also a big fan of Manchester City football club and watches them whenever he can. He also avidly writes and produces a podcast and a number of blogs.