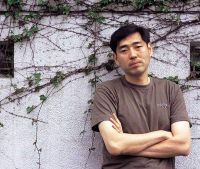 Born in Gochang, Jeollabuk-do, in 1963. YOO graduated from the Dept. of English Literature at Se-jong University and then studied at the Dept. of Film and Digital Media at Dongguk University. Originally a poet, in 1988 he won an award for newcomers from Moon-ye-joong-ang literary magazine. YOO also won the KIM Soo-young Literature Award in 1996. YOO debuted as a director with a film based on his own collection of poems We Must Go to Apgujung-dong on Windy Days in 1993.