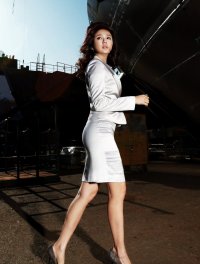 She's the gem that puts a smile on audience's faces with her role in the hit TV drama, Goong, or Princess Hours - actress YOON EUN-HYE!
From singer to actress, she's been at the center of attention and deemed one of the hottest stars of 2006. STAR FOCUS got Yoon Eun-hye for a little one-on-one.

We sat down with her during a commercial shoot for a green tea beverage. Yoon's schedule has been CRAZY hectic, but she was happy to meet with us!

With her soaring popularity as a budding actress, Yoon Eun-hye is swamped with daily casting calls for commercials. She takes this one in-stride - a vivacious young lady, full of bouncy cheer, a bit simliar to her character in Princess Hours!

From hit comic book series, to the small screen - the adaptation of Princess Hours! It's a fictitious tale of Korea as a constitutional monarchy, with a royal family. Yoon is an ordinary high-school girl who ends up marrying the royal prince. For first-time actress Yoon Eun-hye, the response has been pleasantly shocking.

But the truth is that Yoon Eun-hye wasn't welcome in the acting arena at first. People were surprised to hear that such a rookie would be taking the lead in an upcoming drama; A rookie who used to be a singer and had no formal acting training. But she showed them how it could be done! Yoon Eun-hye played her character PERFECTLY and made sparks fly with co-star, Joo Ji-hoon. So, how is it that she dug-out such a hidden talent?

In 1999, a five-member girl group blasted into K-pop. They were Baby VOX and that was Yoon Eun-hye's debut into stardom.
They cranked out hit after hit, and basked in the limelight. Not many people realize how popular Baby VOX actually was - They were one of the first to promote overseas, forerunners of the Korean Wave.
(Successful in music and acting, which was HER personal favorite?)

Yoon is already a 8-year veteran celebrity. Music, drama, and soon enough, we'll see her on the silver screen, with the movie, Escaping Charisma.

This bright-eyed star is also wanted for her spunk in many variety programs, as well as commercials.
She's shown us different sides to her personality in a couple ads, but there's still more she wants to try out.

Quiet and lady-like? There was none of that here today!
The production team wanted upbeat, bouncy, cute! And that's what they got. She gave us the highlight with her special "happy-dance."
Another reason she was so loveable - her easy-going spirit.

Glowing praise for her performance in Princess Hours! Yoon Eun-hye has adjusted extremely well into the world of acting.
One step at a time, we hope she'll continue bringing us more of the best.