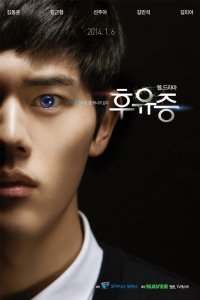 11 episodes
Synopsis
Aftermath is a supernatural crime drama based on the popular Naver webtoon by Kim Sun Kwon ("Survivors of Those Days," "K Errands Center"). It is a thrilling story of murder, mystery, and love that was made exclusively for Naver TVCast for viewing on mobile devices. Ahn Dae Yong (Dong Jun) is a quiet high school student who suddenly develops the super power to predict who is a murderer and who is about to die. Those who appear to have red eyes are destined to die soon, while those with blue eyes are about to commit murder. Ahn Dae Yong decides to use this power to save lives and becomes an unexpected hero for the people.

'Aftermath' was produced by Oasis Pictures, and sponsored by NaverTVCast and Webtoon. It was directed by Kim Yang Hee (Fashion King), a graduate of New York Film Academy in London.

You can read the original webtoon here!