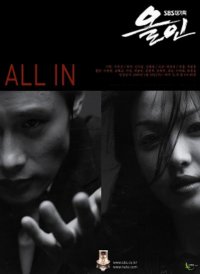 In-ha (Lee Byeong-heon) was born as an orphan and lived a rough childhood with his fathers friend who was a gambler.

Then, he meets Su-yeon (Song Hye-gyo) and falls in love with her. However, he is accused of a murder due to an incident

and flees to the US. In L.A and Las Vegas he gets to know a poker professor and enters the gambling world.

He wins the international poker championship as a pro gambler and enters the hotel management and casino business.

While Su-yeon studies in the US, she receives Jung-won's help and later marries him after a long courtship.

Eventually, In-ha returns to Korea, but Su-yeon's heart aches for In-ha who suddenly appears. She had believed that In-ha was dead.

In-ha and Jung-won(Ji Seong) get entangled in a an once-in-a-lifetime battle...

All In | Links | Suggest a link