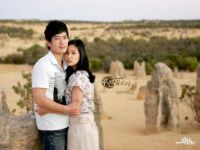 A separation of love due to fate
And a love fulfilled through fate.

When she was a child, Eun-soo (actress Koh So-young) moved to Australia and became a violinist. She has always wanted to return to her homeland of Korea, and her wish comes true when she has the opportunity to perform there. In Korea, she meets the happy-go-lucky car racer named Hyun-woo (actor Park Jung-chul). After she tells him about missing her hometown of Pyeongchang, he arranges to drive her there the very next day. He even shows the courtesy of asking around to find the old village where Eun-soo grew up in. Eun-soo eventually falls in love with this man and vows to live a life of happiness.

Their private engagement ceremony takes place in Australia and they go on a wonderful trip together. But Eun-soos happiness ends here.
After Hyun-woo returns to Seoul, she no longer hears from him and hears word that he has married another woman. She doesnt want to believe this but after hundreds of unanswered calls and e-mails, she has no way of finding out the truth.

Three years pass and she slowly forgets Hyun-woo. She is asked by Dong-hyuk (actor Ryu Tae-joon) for her hand in marriage but by coincidence she meets Hyun-woo again. Eun-soo turns away from him coldly, but soon realizes that the reason for his sudden disappearance was due to their parents.

While Eun-soo is miserable with her sad fate, Dong-hyuk grows angry with her after he learns that she is falling in love with Hyun-woo again. Eun-soos heart wavers as she is stuck between her past and current lovers.

View all 69 pictures for "Blue Fish"