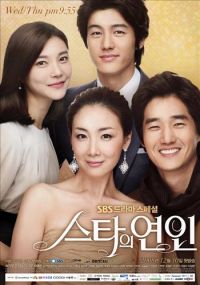 As the ghostwriter for star actress Lee Ma-ris bestselling travel essay Lovers in Asuka, Chul-soo gets to meet Lee Ma-ri one day. Around that time, Lee Ma-ri also has a chance meeting with Jung Woo-jin, who happens to have the same name as her first boyfriend. She feels her heart flutter for the first time since her former boyfriend Kang Woo-jin suddenly vanished from her life. Lee Ma-ri finds out that Jung Woo-jin became interested in her after reading her travel essay, which was actually ghostwritten. So she tries to brush up her knowledge of culture by contacting Chul-soo for private lessons. So this is how Chul-soo and Lee Ma-ri meet again. However, Chul-soo's life becomes complicated after Lee Ma-ri enters his life. Meanwhile, Byung-joon, a friend of Chul-soo and a journalist, discovers that Chul-soo is the actual writer of the travel essay, "Lovers in Asuka" and so he proposes that Chul-soo sell a story about Lee Ma-ri's personal life. He urges Chul-soo to seriously consider his proposal because he knows that Chul-soo needs the money desperately for his ailing sister. While Chul-soo weighs his options, Jung Woo-jin returns to Korea and Lee Ma-ri becomes more concerned about improving her cultural and literature understanding so she asks Chul-soo to live at her home to teach her intensively. Amidst this, Lee Ma-ri and Jung Woo-jin begin to see each other more frequently and Chul-soo becomes indispensable to Ma-ri as a private tutor. One day, Chul-soo realizes that he is no longer needed by Ma-ri and this triggers conflicting emotions within him. Since Chul-soo is pressed for money to pay for the operation that his sister desperately needs, he decides to sell his story about Ma-ri's personal life to his journalist friend Byung-joon. When the story about Ma-ri turns into a big scandal, Woo-jins resolve to marry Ma-ri becomes stronger and he proposes marriage to her. As a wedding gift, Jung Woo-jin tells Ma-ri that he'll bankroll a documentary film based on her travel essay, "Lovers in Asuka." He then asks his former professor to recommend a couple of writers for his documentary film and that is how Chul-soo and Eun-young join the film project as writers. When Chul-soo and Ma-ri meet again during the filming of the documentary...

View all 199 pictures for "Celebrity's Sweetheart"