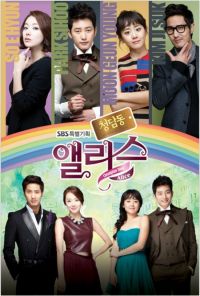 16 episodes - Sat, Sun 21:50
Synopsis
Plucky Han Se Kyung (Moon Geun-yeong) is a fledgling fashion designer with big dreams and an even bigger ambition to succeed. She enters every design contest possible, cheerily dusting off rejections and the accompanying hardships, but it all pays off. Or so she thinks. Her dream job ends up being a rude awakening when she realizes she's been hired as the go-to assistant of the company president's wife  the woman who was once her high school nemesis! The tide turns when Han resolves to move up the social echelon by marrying into a rich family and becoming a "cheongdam-dong" daughter-in-law (aka trophy wife). Han must confront her innermost desires: will she hang up her dreams to dry, or does money really mean everything?

View all 173 pictures for "Cheongdam-dong Alice"