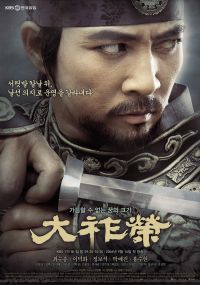 In the midst of the 7th century, Tang Dynasty attacked Goguryeo. Goguryeo had defeated the Sui Dynasty previously. The Emperor Taizong, Li Shimin, led 300,000 soldiers, but his forces were completely defeated by the Lord Yang Manchun. It was 668, only 20 years after Great Goguryeo made his name in its heyday. Was Goguryeo in an extremely precarious position? But this time, due to internal factions, Goguryeo was defeated by the united forces of Silla and Tang Dynasty. A great number of Goguryeo people were massacred. Those homeless people wandered around under the ruling of Tang Dynasty. Among those hopeless and desperate people, a brave hero, Dae Joyeong, courageously stood up to save his nation. He set the suppressed Goguryeo people free from Tang dynasty and then gathered troops. This happened thirty years after the fall of Goguryeo.

Choi Su-jong : Dae Jo-yeong
The first king of the Balhae Kingdom who was born before the collapse of Goguryeo. His childhood was marred with suspicion that he would seize power when he grows up. This shrewd and decisive man falls in love with Cho-rin, the daughter of the chief of the Georan tribe whom he takes hostage to escape from captivity. Cho-rin loves him back but Dae Jo-yeong ends up marrying King Bojangs niece, Suk-yeong. Thanks to his powerful charisma and strong leadership skills, he establishes the Balhae state along with Goguryeo migrants.

Lee Deok-hwa : Seol In-kwi
A Tang Dynasty artisan of the Georan tribe who rose to prominence thanks to his cleverness and talent. He distinguishes himself by subjugating Goguryeo forces, and stands up against Dae Jo-yeong.

Chung Bo-seok : Yi Hae-go
A son of an aristocratic Goguryeo family, Yi Hae-go was raised by the chief of the Georan tribe and became its top warrior. He fights with Dae Jo-yeong over the supremacy in the northern territories but ends up losing to him. The two also face off over the love of the Georan tribe chiefs daughter, Cho-rin.

Park Ye-jin : Cho-rin
The daughter of the Georan tribe chief, Cho-rin meets Dae Jo-yeong at destinys whim and falls in love with him. Wild and proactive, she turns away from her tribe and follows Dae Jo-yeong. She faces off with Suk-yeong, the niece of King Bojang, over Dae Jo-yeongs love but Suk-yeong eventually ends up being Dae Jo-yeongs wife. Cho-rin gives birth to Dae Jo-yeongs son, Geomi, but her love for him ends tragically.