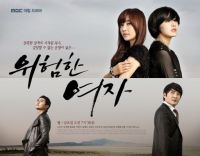 120 episodes - Mon~Fri 7:50
Synopsis
Synopsis
When everything you believed in for your entire life turns out to be a devastating lie then will you direct your anger at the person who caused it all or forgive that person? This drama tells a story about people who are hell-bent on recovering what they think is rightfully theirs while on the opposite side there are people who will fight to protect what belongs to them. In the beginning, the two sides hate each others guts. They do despicable things that will make it impossible to ever make things right again. But there is still a sliver of hope. The pent-up anger within themselves softens and they begin a path of rehabilitation and redemption that will allow them to forgive their enemies and bury the hatchet. This drama is not a story about revenge and aguish but a story of rehabilitation and harmony. Viewers will empathize with their agony and pain while also rejoicing at their happiness. The takeaway from it all is that love is a powerful force that can conquer all.

Kang Yu-ra (Actor Ko Eun-mi)
She looks naïve and vulnerable on the surface but underneath it all, she has a strong will and resilient personality. She has strong beliefs and will stick to them. As the daughter of Jinsong Group chairman Kang, she was born with a silver spoon in her mouth. She loves her family dearly and later becomes devastated when her brother Dong-jun dies. Her life starts to unravel at this point. But she picks herself up and abandons her university studies in America to join her fathers business. She wants recognition from her father that she has what it takes to run the group.

Kang So-ra (Actress Hwang Bo-ra)
Do-hees daughter. She takes after her mother in every way but has a meaner streak. Ever since she was a little girl, she got what she wanted through cunning and sheer determination. When she has a tirade, people cant handle her and will try to get away from her as far as possible. She grew up without a father for 20 years of her life and this left a permanent scar in her heart. Her mother, Do-hee, encourages her to hate Jinsong Group and the chairmans family. So-ra becomes consumed with jealousy, hatred and anger, which she directs at Chairman Kangs family.

Kim Ji-won (Actor Kim Jeong-hyeon)
He is a general manager at the Jinsong Group and dates Yu-ra. He was orphaned at a young age and was taken in by a relative who raised him. Despite the loss of his parents, he grew up to become a well-adjusted person. As a studious student, he was able to gain admission to a prestigious college. Upon graduating, he becomes a top recruit among several big companies. But remembering how his father died due to the constant pressure and demands of big companies, he turns down lucrative offers to work for such companies. Instead, he chooses to work for a small firm. One day, he comes to the attention of Chairman Kang. He is a hardworking person who is highly evaluated by his superiors. Within the company, he is popular among the female employees. But the only woman he loves is Yu-ra. They begin a relationship but then So-ra appears in his life and tries to ruin everything.

Kang Dong-min (Actor Yeo Hyeon-soo)
Second son of Jinsong Group Chairman Kang. Although his father is Chairman Kang his mother is not Yeon-sook. He was born out of the affair between Chairman Kang and Do-hee. Nevertheless, Yeon-sook raised him like her own child. Receiving love and support during his childhood, he liked playing sports and traveling more than studying like Dong-jun and Yu-ra. He has no interest in joining the family business and believes that Dong-jun should absolutely take over the reins of his fathers company since he is the eldest son. Without much ambition to get ahead in life, he is a free spirit who doesnt like to be held down by responsibilities.

View all 17 pictures for "Dangerous Woman"