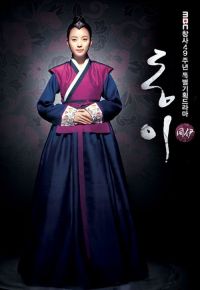 Also known as "Dong Yi - Jewel in the Crown"
60 episodes - Mon, Tue 21:55
Synopsis
This TV biopic traces the tumultuous life of Lady Choi Sook-bin, who was born as a lowly commoner but entered the royal palace to become a royal concubine where she shone ever so brilliantly. The life of her son, who is fathered by King Sook-jong, is also depicted as he transforms into the next king!
Lady Choi Sook-bin gingerly and wisely maneuvers through the deadly political infighting in the royal courts in order to survive and protect her son, who was fathered by the king. She raises her son into a well-balanced and educated person though strict discipline!

Dong Yi (actress Han Hyo-joo)
After her father and brother were executed for crimes that they did not commit, she becomes orphaned at a young age. Through sheer personality, she elevates her status by having herself picked as a palace servant. Cha Cheon-soo is utterly devoted to her and will do anything to protect her. While waiting on court ladies as a palace servant, she is noticed by King Sook-jong and has his son. Their son Prince Yeon-ing later becomes a king. She becomes embroiled in a fierce battle against Queen Jang Hee-bin over whose son will ascend the throne.

King Sook-jong (actor Ji Jin-hee)
He succeeds in reasserting the royal powers of the throne, which had been weakened by court politics. Ascending the throne at the tender age of 14, he grows into a charismatic and excellent leader. He has a strong will to get things done and strikes fear among his subjects. He is impressed with Dong Yi?s charming personality and intellect and later falls deeply in love with her.

Queen Jang Hee-bin (actress Lee So-yeon)
She is much beloved by King Sook-jong but the Queen Mother detested her and had her exiled from the palace. She comes out of exile later on and returns to the palace, whereupon she bears a son to the king. She has a bitter rivalry against Dong Yi throughout the episodes and always opposes Dong Yi on every matter they confront.

Cha Cheon-soo (actor Bae Soo-bin)
During the day, he works at the royal police station, inspecting bodies suspected of dying from foul play, while at night, he assumes the identity of the leader of the underground Geomgye secret society that fights corruption and misdeeds. He dedicates himself to protecting Dong Yi, whom he loves dearly.