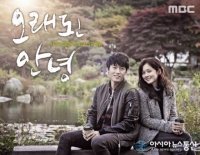 1 episode - Sun 24:05
Part of the "Drama Festival" series
Synopsis
A short drama about a boxer named Su-hyuk whose wife has died. But he travels into the past and re-encounters his wife.