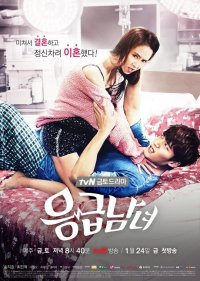 21 episodes - Fri, Sat 20:40
Formerly known as "Emergency Boy and Girl" on HanCinema
Synopsis
Choi Jin-hyeok and Song Ji-hyo star in this playful and sexy drama about a medical school student, Chang-min, and a dietitian, Jin-hee, who fall in love and marry despite his family's strong opposition. When Chang-min marries Jin-hee, he gives up his medical internship to become a pharmaceutical salesman despite the fact that the rest of his family are successful doctors. Their married life is miserable as Chang-min's family looks down on Jin-hee and Chang-min begins to treat her poorly. They finally divorce and go their separate ways until they are suddenly reunited as interns working at the same hospital. Will this couple's tumultuous feelings for each other be rekindled?

View all 239 pictures for "Emergency Couple"