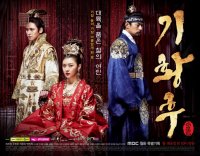 51 Episodes - Mon, Tue 21:55
Formerly known as "Hwatu" (화투, hwa-too)
Synopsis
The series revolves around Ki Seung-nyang, a Goryeo-born woman who ascends to power despite the restrictions of the era's class system, and later marries Ta-hwan to become an empress of the Yuan dynasty, instead of her first love, Wang Yu. The series depicts her loves and political ambitions.

View all 584 pictures for "Empress Ki"