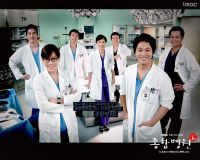 A young woman passed the bar examination so that she could become a lawyer who helps patients in malpractice cases decides to join a residency after she completes her internship. Then there is the passionate man who is dedicated to saving lives even though he graduated at the bottom of his class in medical school. This drama revolves around the lives of these two people who are 3rd year interns at the same hospital as they mature in their careers.
The drama will show the camaraderie among fellow doctors and the tensions and relationships that develop in their lives as they work hard to cure patients. Their personal challenges and down-to-earth qualities will warm the hearts of viewers.

Choi Jin-sang (1st year of residency) / actor Cha Tae-hyeon
His mother who works at a ranch wishes that hell become a professor at medical school but during his six years of medical school and first year as an intern, he constantly got into trouble and his grades were at the bottom of the class. When he joins the residency, his fellow colleagues are Hyun-woo, who was always at the top of his class, and Ha-yoon, who passed the bar examination. At the outset, he faces a tough situation. He lacks in every way as a doctor but hell go to great lengths to save a patients life.

Jung Ha-yoon (1st year of residency) / actress Kim Jeong-eun
After passing the bar examination upon graduating from law school, she decides to join the residency program at a general hospital as a way to prepare herself to become a lawyer who specializes in malpractice cases. With memories of her dad who died from a botched operation, she is compassionate towards patients and has a critical view towards doctors who compromise their values. But while working with her colleagues, she gradually becomes a doctor in her own way and her views also change.

Baek Hyun-woo (1st year of residency) / actor Ryoo Jin
In medical school, he was the top student and Ki-tae recruits him to join the medical research team. Hes an impassionate thinker but he does have a good heart. When Ha-yoon needs help in finding a kidnapper, he does his best to track down the criminal. He develops feelings for her as he helps her in every way he can.

Kang Eun-ji (1st year of residency) / actress Ko Joon-hee
She helped Jin-sang whenever he got in trouble during medical school. During exams, she would share her notes with Jin-sang. But Jin-sang is not aware that she has a crush on him. Though she is glad that Jin-sang is showing himself to be a promising doctor, sshe starts to get worried when Jin-sang and Ha-yoon keep getting into petty arguments...

Kim Do-hoon (Staff doctor) / actor Lee Jae-ryong
After working for just one year in his residency, he is asked to join the medical staff as a staff doctor. He was once a handful but now he mentors younger doctors. He has a warm heart and one time, he left in the middle of a demonstration for a $20 million state-of-the-art medical device to operate on a patient in the emergency room. Hes a doctor who is dedicated to his work of saving lives and that means he is not so keen on advancing his career.

Han Ki-tae (Staff doctor) / actor Lee Jong-won
Having the right connections, hes a star doctor at Sungui University Hospital who is admired by his peers for his skills. Although he is one of the top surgeons in Korea, he selectively chooses the patients hell operate on to keep his career unblemished. He becomes the head of a medical research team that is supported by the hospital and becomes adversaries with Do-hoon who has different principles.

Song Hye-soo (ER department staff) / actress Do Ji-won
As a senior doctor at the ER, where theres always an emergency happening, she is a skilled surgeon who makes quick calculated decisions. She is a perfectionist at work but also has a softer side that she reveals when shes around Do-hoon.

Episode 1
After passing the bar exam, Ha-yoon decides to enter an internship program so that she could become a specialist in malpractice cases when she becomes a lawyer later on. So she goes to the interview to win a spot in the internship program at Sungui University Medical Hospital. She hitchhikes a ride on an ambulance to get to her interview on time. Growing up on a diary farm in Daegwallyeong, Choi Jin-sang is a first year resident who is always causing problems. He gets in trouble after losing a lab pig and he encounters Jung Ha-yoon while he is delivering another lab pig by ambulance, which happens to be the one that Jung Ha-yoon hitchhikes a ride on.


Episode 2
Both Jin-sang and Ha-yoon pass the interview and are asked to join the internship program at Sungui Hospital. But before Jin-sang can celebrate the good news, the supervisor resident Yong-han bust everyones chops and tells them to be on their toes. In the string-tying test that all the first year residents take, Jin-sang comes in last while Ha-yoon and Hyun-woo vie for first place. Ha-yoon eventually takes the top spot. Meanwhile, a kidnapper with a gunshot wound is brought to the ER and a tense atmosphere grips the hospital...


Episode 3
Jin-sang is awarded a plaque by the police force for helping them find the kidnapped girl and saving her life in the process. This gives him immense pride. While the first year residents have drinks with the senior residents including their supervisor Yong-han, Jin-sang gets drunk and talks back at Yong-han to the horror of everyone at the bar. On the next day, Jin-sang realizes that he has to make amends for what he did yesterday to the supervisor but he suddenly experiences acute abdominal pains...


Episode 4
Dr. Han Ki-tae successfully performs an operation on a patient who suffers from Whipples Disease and his fame rises as one of the leading surgeons in the nation. After Jin-sang gets his appendix removed, he announces that he will try his best to join Dr. Hans research team. A patient with pancreatic cancer is hospitalized at Sungui Hospital and the medical staff becomes busy treating her. Dr. Han and Dr. Kim Do-hoon form different diagnoses on the patient who seems to have pancreatic cancer and the mood in the general surgery department becomes turns tense...


Episode 5
Dr. Kim begins operating on Lee Hee-seob and is astonished that he misdiagnosed her after finding out that she has pancreatic cancer instead of a biliary tract inflammation. This deeply disturbs him and sows internal doubts about his abilities. Ha-yoon becomes deeply disappointed that the risky operation that they performed on Lee Hee-seob will now shorten her life. While Hyun-woo avoids going into the operating room, Jin-sang enters the operating room by accident and assists Dr. Kim during the operation. Jin-sang receives the top score among the first year residents and this boosts his confidence.


Episode 6
Kang Young-won, who is scheduled to have a thyroid operation, gets permission from Hyun-woo to leave the hospital briefly. However, he becomes the victim of a hit-and-run accident. When he is taken to the ER, Jin-sang is ridden with guilt because Kang Young-won was his patient. If Jin-sang comes clean and tells everyone what happened, then he might be fired. Since Ha-yoon already knows everything, Jin-sang cant hide the truth either...
Episode 7
After being reprimanded and put on a black list, Jin-sang succeeds in persuading a celebrity patient to get an artificial anus operation. Jin-sang is taken off the list and provides help to the ER during an emergecny. Jin-sang is assigned to treat a hiker who suffered a fall while hiking up Mt. Bukhan and something inexplicably happens to him.


Episode 8
After learning about Ha-yoons future career plans, her fellow colleagues decide that they cant work alongside her and ask the senior doctor to take her off the team. When the hospital committee debates a malpractice suit and assess who is to blame, Ha-yoon speaks up in front of the committee to tells them the story about her fathers death.


Episode 9
Eun-hee awaits a liver transplant since she has liver cirrhosis and Gong-ju, a young girl, also needs a new liver. But there is little time left for her as she waits for a liver donor to turn up. Gong-jus mother and Eun-hee share their fears but...


Episode 10
The liver transplant takes 10 hours as one healthy liver is divided between two patients who need a liver. The operation ends successfully. Hyun-woo breathes a sigh of relief after the transplant operation ends and exchanges high-fives Jin-sang. A patient with acute renal failure is wheeled into the ER and the doctors become tense about how to treat the ailing patient.


Episode 11
Dr. Park Jae-hoon, a.k.a. The Viper returns to the hospital and he chooses Yong-han to be on his team. Yong-han in turn chooses Young-beom and Choi Jin-sang. During Dr. Parks morning rounds, Yong-han, Young-beom, and Jin-sang accompany him and they have a hard time answering the barrage of questions that Dr. Park shoots at them.
A gangster who has stomach cancer calls Jin-sang on his cell-phone and...


Episode 12
Cho Bong-ki, a fugitive, has stomach cancer but he avoids getting an operation to remove his tumor because his name will appear in the hospital records, which will alert the police to his whereabouts. Ha-yoon tries to persuade him but Cho Bong-ki wont listen.
Dr. Park Jae-hoon calls Sang-mi and talks about his divorce. Sang-mi feels awkward to hear him frankly talk about his private matter to her but her heart also flutters.

View all 304 pictures for "General Hospital 2"