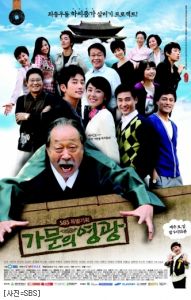 54 episodes - Sat, Sun 22:00
Synopsis
Dan-ah is participating in a seminar in Jeju island. Meanwhile, theres something happening at a motel in the outskirts of Seoul.Tae-young is caught cheating with another woman by his wife at the motel and as he leaves the place he sees his sister-in-law come out of the same motel with another man. After that incident, his brother Soo-young begins seeing Jin-ah, and he meets Mal-soon.President Ha Seok-ho is widowed and he finds out that his girlfriend, Lee Young-in, is pregnant. Then his father suddenly passes away.Lee Cheon-gab and his son Lee Kang-seok hear about the death of Chairman Ha Man-ki and they think it would be a good idea to attend the funeral as a way to establish themselves in high society and break away from their nouveau riche status. So they attend the funeral. Dan-ah meets Lee Kang-seok once again. During the funeral, Dan-ah has to handle the disturbing news that her fathers girlfriend is pregnant and that her brothers wife is having an affair while grieving for her grandfather. After the funeral is over, the wives of her two brothers ask for a divorce and leave them. Now Dan-ah is the only lady in the household and is in charge of preparing the ancestral rites. Hyun-gyu tries to help Dan-ah during these difficult times. Meanwhile, Lee Kang-seok is a thorn in her side as he keeps showing up and creating problems for her. Then, she has to grapple with the news that her father wants to marry his girlfriend, Young-in, because she is pregnant. Every member in her family enters new romantic relationships....

Glory of the Family | Cast

Glory of the Family | News

Glory of the Family | Shopping

Glory of the Family | Pictures

View all 288 pictures for "Glory of the Family"

Glory of the Family | Links | Suggest a link

Glory of the Family | Reviews

Glory of the Family | Facts

Glory of the Family | Community