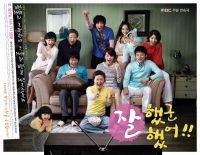 Synopsis
Everyone has lofty dreams that they toss around in their head. It? those very dreams that give individuals the strength to go on and persevere. But dreams have a way of betraying you. In ?heer Up on Love,?one little slip destroys a woman? dreams, resulting in a failed life and career. But people around her help her get back on her feet so that she can pursue her dreams again. She had a child with a former boyfriend but after they broke up, she moved on with her life and started dating a much younger man but then the man who fathered her child reenters her life, leading to complicated issues revolving around romance and life in general with a warm touch.

Lee Kang-joo (Soo-hees secretary & ceramic pottery maker) / actress Chae Rim
Shes an adorable woman who exudes a natural confidence. She wears a smile all the time and is fiercely loyal to her friends.
Shes also loyal in romantic relationships. She believes that loving someone is equal to making a vow to that person.
When she became Seung-hyuns tutor, she found that he kept clinging onto her.
Even when she cut off all contact with her friends and took a trip to be alone, Seung-hyun somehow found her and confessed his feelings for her.
She tries hard to ignore Seung-hyuns romantic overtures but she finds herself opening up to him. But then...
Her ex-boyfriend Ho-nam appears in her life again. Ho-am is the very man who broke her heart by dumping her all of a sudden one day.
After returning from a meeting with Ho-nam, Kang-joo looks at her sister Byul and feels so weak and vulnerable.

Choi Seung-hyun (Fitness club owner & Soo-hees son) / actor Eom Gi-joon
Hes stubborn, hyperactive, and impatient. But thats what makes him charming.
Hes a passionate lover but doesnt cling to the opposite sex and so girls come and go in his life like a revolving door.
But there is one woman whom he had deep feelings for. Shes Kang-joo.
Kang-joo is the only person who doesnt see that he changed into a nicer and diligent person because of her when he used to be short-tempered and lazy.
With an undying lover towards her, he tries to win Kang-joos heart...

Yoo Ho-nam (psychiatrist) / actor Kim Seung-soo
Kang-joos high school sweetheart.
He is impeccable and always maintains his composure. He follows a strict routine.
But when hes around with kids, he becomes playful and relaxed.
Due to the failure of his fathers business, he broke up with Kang-joo and left for America where he enrolled in medical school and became a doctor. He is engaged to Mi-ra, who is pretty and from an affluent family. She can also be blunt at times.
But then one fateful day, he meets Kang-joo again in a chance encounter.
He thought he had buried his past feelings for her in the deep recesses of his mind. When he learns that Kang-joo is a single mom, he feels a deep concern over her situation...

Na Mi-ra (Ho-nams fiancée & Daughter of Soo-hees friend) / actress Kim Jeong-hwa
With her pretty looks and wealthy family background, she took ballet classes as a child, which gave her a great-looking figure. Shes bubbly and always smiling.
But shes very possessive and competitive about getting what she wants.
She majored in modern dance in college and to pursue her dreams of becoming a musical actress, she studied overseas in New York. But she only found disappointment in New York and spent most of her time infatuated with Ho-nam.
When Ho-nam returns to Korea to open his private practice, she follows him back and prepares for their wedding.
Since she was close to Choi Seung-hyuns family since she was a kid, she has a great friendship with Seung-hyun.

Episode 1
Kang-joo used to be Seung-hyun? tutor when Seung-hyun was in high school and she was a college student. Seung-hyun develops a crush on Kang-joo who is two years older than him and confesses his love to her before he joins the army to complete his mandatory military duty. He asks her to be his girl... Seung-hyun? mother Soo-hee has a romantic relationship with Sang-hoon who is a freelance photographer. Ho-nam is a psychiatrist who graduated from a medical school in America and was planning to pick up his fianc? at the airport but he was unable to go because a fellow doctor needed him to fill in for him. His fianc? Mi-ra gets mad at him and decides to tell him off by going to his office at the hospital. Since Ho-nam was having a private session with a patient, he gently persuades her to wait outside until he is done. This makes Mi-ra feel dejected and unwanted.

Episode 2
Jung-ja, who is Sang-hoon? mother, meets with Soo-hee and tells her not to see her son again. Soo-hee is troubled by her words and asks Sang-hoon to take her to the beach... When Seung-hyun hears that Kang-joo is sick, he gets worried and buys a load of gifts for her as he pays a visit at her home...

Episode 3
Young-soon and Kang-joo are stunned to find that Kang-joo? younger brother Eun-hyuk had a baby and consequently gave up on pursuing his degree at an American university.
Eun-hyuk tries to placate Young-soon and Kang-joo by explaining that his child and girlfriend mean more to him than anything else...

Episode 4
Jung-ja meets Soo-hee again and reiterates her wishes for her to not meet her son. Ok-rye realizes what kind of situation Soo-hee is in and this saddens her.
Mi-ra is overjoyed that Ho-nam came to pick her up at the airport and proudly shows off the mini-sign that Ho-nam held up near the gates with her name printed on it...

Episode 5
Eun-bi and Eun-hyuk move into Young-soon? home.
Young-soon gets all pumped up to tell off Eun-bi for ruining her son? life but when Eun-bi acts so nonchalantly about her relationship with Eun-hyuk, Young-soon is flabbergasted...

Seung-hyun? feelings are hurt when Kang-joo doesn? wear the ring that he bought for her..