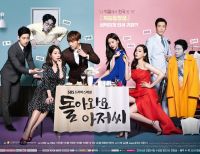 16 episodes - Wed, Thu 22:00
Formerly known as "Hello, My Precious" (안녕 내 소중한 사람, an-nyeong nae so-jeong-han sa-lam)
Also known as "Come Back Mister" and "Come Back Alive"
Synopsis
Based on an original Japanese human comedy novel "7 Days of Tsubakiyama" by Asada Jiro, about a man who doesn't know he's dead, coming back alive and mingling with people he didn't know before and accepting death.

View all 254 pictures for "Please Come Back, Mister"