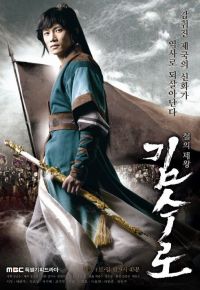 Synopsis
After being hidden in history until the 1970's, the Gaya Dynasty started receiving attention when many historical relics from this era were found. Legend has it that about 1/3 of Koreans are descendents of Gaya, but it has never been used as a background for a TV show in the past.
Gaya, a progressive and liberal dynasty full of beauty. Gaya, the dynasty that conquered overseas trade and increased their influence not only to Asia, but to the Middle East by exporting their iron products.
In that place, there was Kim Su-ro, a man who ruled Gaya with autonomy and competition instead of centralization and control, and Jeonggyun Moju, the mother of Gaya. It's no coincidence that Posco, the company often called king of iron manufacturing, is one of the world-leading companies, and the fact that our country has one of the most competitive shipbuilding industries. This is all due to Gaya, the Iron Dynasty and the king of overseas trade.
As a TV show, 'Gaya' is still like a barren ground.
But that's why we have to keep on pursuing it so it can open a new chapter.
It is now more important than ever to integrate classes, regions, and generations, and we want to learn about Kim Su-ro's life, the man who was responsible for founding Gaya, and how he brought the country together in his own way.
Additionally, this will be a TV show that recreates the symbolic and mythical characters of Kim Su-ro, Seok Tal-hae, Yijin Ahshi, Jeonggyeon Moju etc. and experience their progressive and liberal nature.

Kim Su-ro (Ji Seong)
Gaya's first king to unify the 12 small countries of Byeonhan. He is the son of Jaecheongeum tribal leader Kim Yung and Jeong Kyeon-bi of the northern nomadic people. He is a chivalrous person and also a free spirit. He has the temperament of a passionate revolutionary accompanied by a gentle charisma that can win over his enemies with his warm heart. He grows up as Jobang in the blacksmith village. He is the object of a prophecy at birth, doesn't know his birth mother Jeong Kyeon-bi, and faces numerous adversities before becoming king. He becomes king after long-standing rivalry and competition with Seok Tal-hae, and achieves his dreams of establishing a country that conquers overseas trade through iron manufacturing products.

Seok Tal-hae (Lee Pil-mo)
The fourth king of Saroguk. He is meticulous, courageous, and has an authoritative personality full of desire and determination. He was abandoned as a baby by the sea, but was found by Ahjin Eisun, and competes with Su-ro his whole life. He is the type of person that does not rest until he gets what he wants. He has no qualms about using people and then discarding them. After losing the fight to Su-ro, he returns to Saroguk and marries Ah-hyo, and becomes the king of Saroguk.

Hur Hwang-oak (Seo Ji-hye)
The first queen of Gaya. She is the daughter of Hur Jang-sang, who is a wealthy merchant from India. She is exotic and elegant. She has a good understanding of how the world works as she followed her father around his sales route since she was a child. She has a gentle but strong side to her, and is also a magnanimous woman. She is an ideal first lady who contributes to the founding of the country that conquers overseas trade.

Ah-hyo (Kang Byeol)
The princess of Saroguk. She is the daughter of Namhae Chachawoong. She is adventurous and has great fighting skills, which she has learned from her aunt Saro. She has a good knowledge of the reality of Saroguk, and secretly enters Guyaguk with the purpose of learning iron manufacturing skills, but falls madly in love with Su-ro. However, her love for Su-ro is unfruitful, and she marries Suk Tal-hae and helps him become king.

Yibiga (Lee Hyo-jeong)
He is a master shaman of iron smelting village, one of Guyaguk's colonies. He has a godlike charisma that makes him seem unapproachable. He experiences conflict about his role as a Cheongun worshipping the gods and his human ambitions, but he identifies Su-ro as the object of the prophecy about Jurisun?s ship and helps Su-ro become king from behind the scenes.

Jeong Kyeon-bi (Bae Jong-ok)
Wife of Yibiga. She is the wife of Jaecheongeum tribal leader Kim Yung, but loses Su-ro as soon as she gives birth to him and settles in Guyaguk. She later becomes Jeonggyeon Moju, and gains strong influence with iron manufacturing skills from the north, and also finds herself in conflict with her son, Su-ro. She is truly a woman of iron, as she has descended from strong and courageous blood.

Shingwi Ghan (Yoo Oh-seong)
The 2nd leader in command for Shingwi town, one of Guyaguk's nine colonies. He is a political opponent of Yibiga, and has the most ambition for power. He shows a scary determination to become king, but does not rush it and is very careful and thorough.

Yeom Sa-chi (Lee Won-jong)
A wealthy merchant of Guyaguk. He is a foreigner from Jinhan, emigrated to Naknang, and then moved to Byeonhan. He monopolized Gimhaekwan's markets but is always thirsty for more, as he has not conquered the iron trade rights of iron smelting village. He finds out about Tae-gang's ambition and helps him, but he is always ready to betray anyone for his own gains.