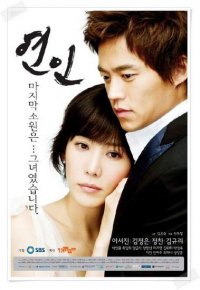 Chang-bae, played by actor Kim Roe-ha, vents his anger on Kang-jae, played by actor Lee Seo-jin, after being reprimanded by President Kang. Chang-bae shows Yang-geum, played by actress Yang Geum-seok, a photo of Mi-ju, which leads to Yang-geum's decision to arrange a marriage between her son and Mi-ju. Yang-geum calls Se-yeon, played by actor Jung Chan, to meet Mi-ju on an arranged date. Se-yeon is not interested in meeting someone that his parents have picked out as his future wife so he sends a friend in his place instead.
Meanwhile, Mi-ju gets angry with the rude friend that Se-yeon sent to meet her. In a fit of anger, she splashes wine all over Se-yeon's friend. Se-yeon begins to feel interested in Mi-ju as he watches her startling actions.
Mi-ju barges into a Japanese restaurant to pick a fight with Kang-jae, who she mistakes for another man who got Jung-hwa pregnant and then dumped her. While roughly clutching Kang-jae's collar, a group of gang members wearing black suits emerge before her...
Mi-ju (actress Kim Jung-eun) is disturbed when she hears the sound of breaking glass from the home of her neighbor where Yu-jin (actress Kim Gyu-ri) lives. Yu-jin is arguing with her boyfriend and tells him that the flowers he sends and the expensive luxury car he bought for him are meaningless. When Yu-jin demands that Kang-jae settle down and live with her, he tells her that he can't.
Minister Yoon is faced with problems when the orphanage shelter is seized. Kang-jae is filled with contempt when Mi-ju tell him to buy the land that the orphanage is sitting on. While Mi-ju keeps pressuring him to buy the land since he's rich, Kang-jae is knifed in the back by an unidentified assailant. Mi-ju is shocked to see Kang-jae bleeding and Sang-taek (actor Lee Ki-young) tells her to immediately treat Kang-jae's knife wounds because they won't be able to reach a hospital in time...

View all 128 pictures for "Lovers"