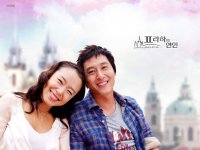 Sat, Sun 21:45
Synopsis
Yoon Jae-hee, the daughter of the President, who still misses her ex-boyfriend, works as a diplomat in Prague. When she gets tired of waiting for her ex-boyfriend who left and never returned, she by chance happens to meet Sang-hyeon, who is looking for his ex-girlfriend in Prague. Sang-hyeon is a hot-tempered but righteous man. For his girlfriend, Hye-joo, he runs into debt, sending her to Prague for her studies at his own expense, even though his income as a minor detective is quite poor. But, after he receives a sudden good-bye letter from Hye-joo, he visits Prague in pursuit of her. Jae-hee asks him to participate in a couple's marathon race in return for her help in finding Hye-joo.

Jae-hee and Sang-hyeon feel drawn to each other, but Sang-hyeon eventually returns to Korea. Soon after that, Jae-hee finishes her diplomatic duties in Prague and also returns to Korea. She runs into Sang-hyeon who is directing traffic as a police officer on the street, and their relationship begins in earnest in Seoul. But their old loves Hye-joo and Yeong-woo keep them from falling in love. In addition, after a secret about Jae-hees father, which has been kept from Sang-hyeon, is revealed, the love between Jae-hee and Sang-hyeon becomes more complex and problematic.


Characters of Lovers in Prague

Yoon Jae-hee / Played by Jeon Do-yeon
She is the daughter of the President and a 29-year-old incumbent diplomat. She is always upright and enthusiastic. Even though her mother passed away when she was little, her angelic personality makes her loved by many people around her. However, she sometimes gives her bodyguards a hard time by giving them the slip and taking a trip. She has wanted to be a diplomat ever since she was little and when she was 24 years old, she finally passed the Civil Service Examination for Foreign Affairs. For her first assignment, she was sent to Paris. There, she met Yeong-woo and fell in love with him, but Yeong-woo went back to Korea at his fathers request and after five years never returned.

After her duties were finished in Paris, she was assigned to work in Prague. At a time when her duties are almost finished in Prague, she unexpectedly meets a minor detective named Sang-hyeon, who came to Prague looking for his ex-girlfriend. Just when she decides to forget her old love, Yeong-woo, who disappeared like a dream, and begin a new love with Sang-hyeon, Yeong-woo returns.

Choi Sang-hyeon / Played by Kim Joo-hyeok
He is an aging 34-year-old bachelor, who has worked as a minor detective for 8 years. He is a hot-tempered person whose actions are quicker than his rationale, so he is often asked to give a written explanation and given a pay cut. However, Sang-hyeon who helps unfortunate children by using his own money, truly has a warm heart. His righteousness and integrity are strong enough when faced with a powerful person, but tender in front of a vulnerable person. His parents, who ran a flower garden, were killed by a hit-and-run accident on their way home from an early-morning flower market when he was an adolescent. After he dealt with the policemen who could not help him solve the hit-and-run case, he decided to become a righteous policeman and not to make a person like him suffer again.

He met Hye-joo when he was sent to solve a robbery case and fell in love with her. For Hye-joo, who always wanted to study abroad, he cancelled his installment savings and ran into debt to send her to Prague for her studies. But, three years later he ends up receiving a good-bye letter from her. Finally, he goes to Prague to find her, but the Hye-joo he meets in Prague has become a totally different person. He meets Jae-hee who has been hurt by love just like him and eventually falls in love with her.

Ji Yeong-woo / Played by Kim Min-joon
He is a 34-year-old outstanding public prosecutor and the son of the chairman of a leading conglomerate. Because of his father who has problems in his sexual relationship, he grew up without much family love and has a half brother. He has his fathers sharp-witted brain as well his particular personality. In his high school days, he got involved with his fathers stocks. However, a rival companys stocks under his fathers name caused a serious problem, which threw the stock market into confusion.

His father who sensed his brilliant ability did not blame him for the problem, and bought him a sports car as a present instead, but not until after he profited from the stock deal. Because he wondered what money could not solve, he graduated from law school and passed the Judicial Examination. After he was exposed to the spotlight, he went backpacking in Paris to avoid everything. He met Jae-hee in Paris and fell in love with her. But, he found out that she is a diplomat and the daughter of a Presidential electoral candidate and has been apart from her for five years because of his fathers interjection. Finally when he sees her again, she says she has forgotten him and is in love with someone else. He really loves Jae-hee, but he cant do anything about it, nor does he want to hurt her.

Kang Hye-joo / Played by Yoon Se-ah
She doesn't remember her parents because she grew up in an orphanage from the age of six. When she saw the principal of the orphanage's daughter play the piano, she wanted to play as well. After graduating from high school, she earned enough money to go to a college and finally graduated from an evening community college. She taught children in a kindergarten, but this did not come naturally to her.

One day, Sang-hyeon appeared and seemed so nice and sincere. She wanted to live happily with a good man and she ended up falling in love with him, because he trusted her unconditionally and supported her a lot. She went to Prague to study with the help of Sang-hyeon who worked as an interpreter for a leading conglomerate. Unfortunately she became pregnant with his child. She knew she had made a wrong choice, but desperately wanted to be promoted to a higher position. She was intent on rising to the top, which made her decide to finally break up with Sang-hyeon. Shortly afterwards, she realizes her mistake and yearns to be with Sang-hyeon again. But, the fact that he wont come back to her makes her sad. She looks fragile and vulnerable yet she does have a strong side to her.

View all 44 pictures for "Lovers in Prague"