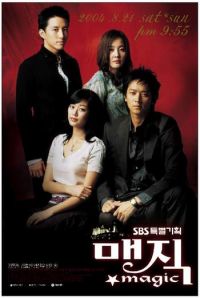 Kang-jae grew up under a jobless, gangster father. When Kang-jae accidentally meets Lee Dae-hae (Suh In-sok) and his son Sun-mo, he feels more attached to Dae-hae than to his own father. Through Dae-hae and Sun-mo, Kang-jae learns the basics of magic as well as what fatherly love really means. Sun-mo, on the other hand, has a love-hate relationship with his father, who only cares about magic and nothing else. Meanwhile, Sun-mo is heartbroken by Dan-young, who falls in love with Kang-jae. Before that Dan-young was living with Sun-mo, mistakenly thinking that he is her long-lost brother before she was adopted. Yun-jin, Dan-youngs stepsister, instantly falls in love with Kang-jae and Kang-jae decides to marry her, not for love but for the sake of fulfilling his own ambitions at the price of spurning Dan-young. Starring: Kang Dong-won (Cha Kang-jae), Yang Jin-wu (Lee Sun-mo), Kim Hyo-jin (Yoon Dan-young), Um Ji-won (Ha Young-jin) Kang Dong-won Funny Wild Girl (MBC), Something about 1% (MBC) Yang Jin-wu Great Ambitions (SBS) Kim Hyo-jin Our House (MBC), Platter on the Side (SBS) Um Ji-won Into the Storm (SBS), Gilded Chariots (MBC)