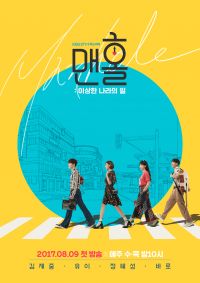 16 episodes - Wed, Thu 22:00
Synopsis
Man-Hole tells the story of Bong-pil (Kim Jae-joong), an unemployed man who mooches off his parents while pretending to study for the civil service exam. Bong-pil time travels into the past (through a manhole?) in an effort to stop the wedding of his lifelong crush, Soo-jin ('UEE'), set to happen one week into the future.