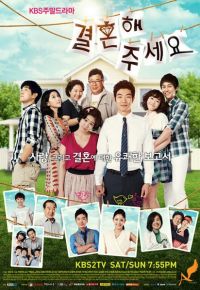 Also known as "All About Marriage"
Sat, Sun 19:55
Synopsis
Jung-im closes down the shop early in preparation for her father-in-laws 60th birthday. Yet, his sons and daughters are nowhere to be found, and so as her husband Tae-ho. At this hour Tae-ho is with his co-worker Suh-young, whispering loves under the curtain. Nowadays, Tae-ho has no arousal around his wife, and sees no sparks in their conversations. Suh-young, on the other hand, is a light to his dull life. As secrets can never stay sealed forever, during his sleep Tae-ho unconsciously blurts out his love towards Suh-young. After such bitter incident, Jung-im is dragged to I-dol concerts by her friend Aeh-ran, and unexpectedly ends up in a fight. Soon, the press releases news about her under the title by, the revolting vigilant fan in her thirties! Then Jung-ims life falls apart, as Tae-ho divorces her. Yet what she had not realized is that her life could also turn towards good when given just the right chance. As entertainment agencys head Hyun-wook decides to turn Jung-im into a successful Cinderella, her life changes! Then one day, as Tae-ho turns on his radio he hears a voice, a familiar one yes, it was his ex-wife Jung-ims. What would happen next?

View all 442 pictures for "Marry Me, Please"