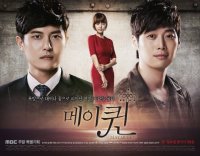 32 episodes - Sat, Sun 21:50
Synopsis
Set in the local setting of Ulsan, this drama is a story of human triumph and success that the heroine Hae-ju achieves. Starting a life in utter poverty will make life depressing and leave a person with a lifetime disadvantage in some cases. Overcoming these obstacles, Hae-ju ultimately finds success. Burdened with the secret past of her parents, Hae-ju navigates treacherous waters to reach her goal.

Starring
Cheon Hae-ju (Actress: Han Ji-hye)
She possesses natural confidence along with a sunny disposition. With an infectious curiosity, she has an enormous positive outlook on life. Her father was a sailor so she also became interested in boats, which led her to learn how to fix them. But the accidental death of her father when she was a sixth grader revealed a secret about her past. She is unable to leave her family because of the sense of duty she feels towards her late father. As she turns into a young adult, she gets involved in offshore oil drilling and finds out that her real biological father committed his life to oil exploration...

Gang-san (Actor: Kim Jae-won)
He is a friend of Chang-hee and the grandson of the founder of Haepoong Group. Growing up with a silver spoon in his mouth, he was always cheerful and full of energy. He has a photographic memory that serves him well in the interests he pursues. He had a crush on Hae-ju just like his friend Chang-hee. After spending 15 years abroad, he returns to South Korea and is reunited with Hae-ju, and the old feelings he had for her return once again. Hae-jus charm and bubbly personality gradually melts Gang-sans heart.

Park Chang-hee (Actor: Jae Hee)
He was Hae-jus first boyfriend. Chang-hee is a perfectionist who keeps his guard up all the time. He is preternaturally smart but also a workaholic. Many people mistake him as the son of Cheonji Groups chairman when, in fact, he is the son of the chairmans butler. He chooses the daughter of the Cheonji chairman over Hae-ju as his wife in order to become rich and end his parents miserable life. This leads to him being on the opposite side in the rivalry between Cheonji Group and Haepoong Group where Hae-ju and Gang-san work alongside each other...

View all 414 pictures for "May Queen"

May Queen | Videos | Suggest a video

May Queen | Links | Suggest a link