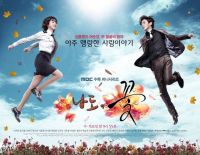 15 episodes - Wed, Thu 21:55
Synopsis
A tough female police officer who suffers from depression falls in love with a young multimillionaire whom she initially believed was a parking attendant. Instead of counting her lucking stars, she is taken aback by how rich he is. Officer Cha Bong-sun is a peculiar woman who defies the rigid social hierarchy and rails against it. And Seo Jae-hee, the millionaire boyfriend, is a peculiar man who falls in love with this quirky police officer. They fall passionately in love with each other. A crazy sort of love. A story about people, relationships and love.

Cha Bong-sun (Actress Lee Ji-ah)
She is a pretty, petite police officer who has a fiery personality. She has no friends and invokes a strong negative emotion among her fellow policemen. But she suffers from depression, which is what makes her so difficult to get along with. She has trouble keeping a relationship and hardly has any friends because she rubs people the wrong way. But underneath her abrasive personality, she has a tender heart. After encountering Seo Jae-hee, she starts developing feelings for him. Will they be able to have a romantic relationship?

Seo Jae-hee (Actor Yoon Si-yoon)
He is pursued by three women who love him. But he is a free spirit and also an undercover boss. When his parents died when he was just 13, he had to grow up quick. He soon began delivering papers, working at restaurants and holding down a factory job. One day, he meets Park Hwa-young and they start a clothing brand together which they named Berke. But he commits a mistake that causes the death of Parks husband. He is ridden with guilt towards Park because of what he did. But he falls in love with Bong-sun, which leads to a love triangle.

Park Hwa-young (Actress Han Go-eun)
She has a towering ambition and is predisposed to being jealous. She is the CEO of Berke. She is a sharp businesswoman who is comfortable with taking big risks. After majoring in fashion in college, she started a small clothing brand with the help of her wealthy father. She encounters Jae-hee when starting her business. Jae-hee impresses her with his drive to succeed as he pushes for international distribution deals to expand overseas. In the meantime, Hwa-young is in charge of everyday business operations. During this period, her husband is killed because of a mistake committed by Jae-hee. So she becomes a widow and single mom overnight. Despite what Jae-hee did, she falls in love with him because he is passionate and very talented.

Park Tae-hwa (Actor Jo Min-ki)
Sometimes he acts his age and sometimes he doesnt. He is a very peculiar character. His father is Hwa-youngs uncle. Having a wealthy father who owns prime real estate in Gangnam, wealthy area in Seoul, he carries on many relationships with women. He is calculating but warmhearted. He is a logical man who knows the power of being irrational. Although he was born with a silver spoon in his mouth, he empathizes with poor folks. When he is in a relationship with a woman, he treats her with utmost respect in a gentleman-like way. But he becomes the target of Kim Dal who is a very manipulative charmer.

Kim Dal (Actress Seo Hyo-lim)
Having been raised in the countryside, she always wanted to live in the city and finally got her chance when she gained admittance to a college. After realizing that young men in the city care a lot about the background of a girl before deciding to date them, she decides to lie and tell everyone she studies at a graduate school of fashion design. She dreams of marrying the scion of a wealthy family. She is very talented in winning over men. But will she succeed in nabbing a scion of a wealthy chaebol family?

Me Too, Flower! | Shopping

Me Too, Flower! | Soundtracks, OST (Sponsored)

Me Too, Flower! | Pictures

Me Too, Flower! | Videos | Suggest a video

Me Too, Flower! | Links | Suggest a link

Me Too, Flower! | Reviews

Me Too, Flower! | Community