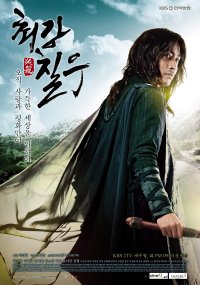 Here comes the Korean-version caped crusader! In this historical action drama, a singer-turned-actor Eric cuts a dashing figure as a Zorro-like hero. Living a double life, Chilwu(Eric) is nothing but a negligent officer in the daytime, but at night he turns into a charismatic leader of five assassins standing up against injustice and brutality committed by the wicked in the 17th century Joseon Dynasty. Enraged at his innocent sister's death, our hero makes a 180-degree transformation, changing into an assassin to fight against the corrupt world. Watching swashbuckling action scenes including Erics rousing swordplay and flamboyant martial arts, viewers find themselves gradually unmask a conspiracy and mystery surrounding Chilwus assassin group.

Chilwu escaped from Muryundang with his younger sister Uyeong, when his parents were branded as rebels and got killed. Now, he is living as an official of Uigembu, a government department in charge of interrogating convicts, leeching off people and groveling like a dog to authority. All he cares about in the world are his sister Uyeong and Soyun, his childhood sweetheart who now became the government slave. His anger bursts when Uyeong gets killed involved in the private loan business of the upper-class. Chilwu decides to punish Heo Wondo, who is behind the death of Uyeong, by himself.

Chilwu slays Heo Wondo and Min Seungguk witnesses the scene. Unexpectedly, Heo Wondos wife is captured being accused of murdering her husband. Chilwu finds out the harsh life and the bitter feeling Mrs. Heo had because of Heo Wondo, and helps her break out from the prison. Meanwhile, Han Yajun of the Ssaritgol Han Clan is awarded a gate erected to commemorate a virtuous woman when his daughter-in-law committed suicide. Chilwu hears the unfair story of the late daughter-in-law of Han Yajun from Han Yajuns grandson and receives his first commission as an assassin.

Chilwu is tensed when he finds the fact that Min Seungguk, who witnessed the scene of Chilwu executing Heo Wondo, is a diarist recording history at the Saganwon. Regarding the case of Heo Wondo, Min Seungguk is searching for Sacho written about the Crown Prince Sohyeonsejas death. In the mean time, lots of people are killed randomly for no reason. Witnessing the murder scene, Chilwu and Seungguk decide to team up to find and kill the murderer for the first time. They find that some of the dead villains have marks of the lightning-shaped wound.

The appearance of a swordsman leaving victims the lightning-shaped wound brings fear to Chilwu and Min Seungguk. In the mean while, lots of women are being kidnapped and sold to a brothel. Chilwu receives a commission for revenge from a dying harlot. As an officer, Chilwu stands guard at the birthday feast of the interpreter Kim Marjung and he runs into the assassin Jaja who sneaks in to kill the interpreter Kim. While Chilwu is combating against Jaja, he gets injured on his chest. Chilwu is startled to find the lightning-shaped wound on his chest.

Chilwu and Soyun go circle around the pagoda to pray for their wishes. All of a sudden, somebody puts a letter of commission in Chilwus hand while he is circling the pagoda., Now Chilwu and the other assassins sense danger that their identities could be discovered. The commission is about the revenge for Lady Okbong, who was betrayed by her lover Kim Johyeon, who took the first place in the civil service exam thanks to Okbong who had took the test in his place. In the mean time, Namdeuk, who secretly runs a private detective agency with Cheolseok, gets a request from Kim Johyeon. He asks Namdeuk to find Okbong, who is gone missing. Not knowing about the others secret night jobs, Chilwu and Namdeuk bump into each other while they are working on the same incident.

Please kill the elephant! Its the first commission after Namdeuk, Yeondu and Cheolseok joined the gang of assassins. The three children from Inseong County ask to execute the elephant which took the life of their father. Since the elephant is a gift from Qings diplomat, the animal is treated like a fifth high officials and the provincial office takes care of it. All the assassins, who have never seen the creature, rush to Inseong out of curiosity. They notice the common people suffering because of the elephant consuming mountains of rice every day.

Min Seungguk gets a message from Mu In-hei, the group that investigates the death of Crown Prince Sohyeons death. On his way to the meeting place, he sees a colleague dead with the lightning-shaped wound. When the leader of Wunggi pa Gumgye, the gang that controls the street market, is assassinated, the opposite side of Gumgye, Janggun pa, initiates the war between the two troops. The biggest victims of the flight are the people who work at the street market. They give a commission to the assassins to exterminate Gumgye. Seungguk is examining the case about Mu In-hei, and figures out the group and Gumgye are related.

After the extermination of Gumgye, the news about the assassins widely spreads from markets to Uigembu. Using this, some people committed crimes, pretending themselves as the assassins. This made Uigembu to give an order to mop-up all of them. Chilwu and the assassins are in a danger of their residence could be discovered.

The copycats of the assassins are committing the crimes. Uigembu starts the investigations and Heoksan also searches for them. They put out the dragnet and threat the assassin group. While Chilwu and Heoksan are individually searching for the copycats, they find something in common.

The general of Qing, Yong Goldae, visits Chosun with diplomats. They request horses, rice for their army, and girls. The government brings an order to the whole county, forbidding marriage, in order to select the girls to send to the king of Qing. The assassins received lots of requests, asking to rescue the girls, but they cant easily get into action since it contains political issues.

View all 237 pictures for "Mighty Chil-woo"