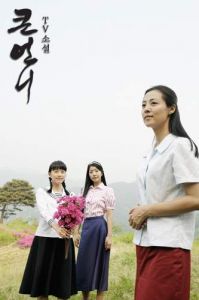 A heartwarming family story unfolds, revolving around the eldest sister who makes sacrifices for her younger sisters. In-ok, the eldest of three sisters becomes the breadwinner of a poverty-stricken family at the age of thirteen when her parents passed away. Despite abject poverty, In-ok is always optimistic and confident, and lives her life to the fullest. Much to her great disappointment, however, she finds that her second youngest sister, In-su, has a baby out of wedlock. After giving birth to a baby girl, In-su leaves for Germany to pursue her dream of becoming a doctor, leaving the burden of raising her child to In-ok alone. This is a tribute to every woman in the world who has struggled to endure all hardships and taken good care of family by sacrificing her own life.

View all 159 pictures for "My Pitiful Sister"