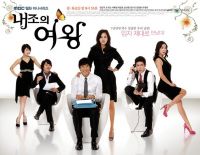 16 episodes
Synopsis
A bittersweet success story of a man whose wife does everything she can to help her husband get a leg up in society so that she can also reap the rewards from his success and become a glamorous housewife. But what is the real reason that drives her and her female friends to obsess about success?
A modern-day Cinderella who wasnt able to nab a knight in shining armor! Here we have one woman who pours all her energy into making her husband a success in society. Another woman who is like a servant gets her hands on the glass slipper, which fits! Then theres the woman who steps on a princess with the stiletto heel of her shoe. The realities of womens social clubs! The power of their husbands determines the pecking order of their wives status in society. A real princess who has all the material things in life that she could ever want but remains unhappy! And a woman who wants to be loved.

Cheon Ji-ae (age: 34, Wife of Dal-soo, a salaried office worker) / actress Kim Nam-joo
Cheon Ji-ae used to be the most popular girl in school.
But now shes over 30 and married to a dimwit husband who also happens to be unemployed.
She thought shed live a comfortable life by marrying a guy like him but she later found out that she was totally wrong about him! But she cant live like this forever!
If its too late to become a modern-day Cinderella, then shell at least aim to become a princess. And in order to make that happen, shell do whatever it takes to make her husband a success. Shell even grovel and beg people to hire her husband...
She uses all of her charms and abilities to finally land a job for her husband at Queens Food.
But its just the beginning as she tries to get her husband rapid promotions within the company...

Yang Bong-soon (age: 34, wife of Joon-hyuk, a senior manager) / actress Lee Hye-young
She shadows Ji-ae and was like her servant when they went to school together.
When Joon-hyuk, whom she had a crush on, had eyes for Ji-ae, she carefully devised a plan to split them up. By showing her utter devotion to Joon-hyuk, she was able to get him to commit and marry her. But she still harbors an inferiority complex towards Ji-ae, who is after all her husbands first sweetheart.
One day, Ji-ae moves next door to her apartment. She also learns that Ji-aes husband works under her husband. So she starts to get on Ji-aes nerves on purpose, knowing that she has the upper hand, and it makes her feel good. But then she notices that husband Joon-hyuk is transfixed with Ji-ae.

Eun So-hyun (age: 29, Wife of Tae-joon, the company president) / actress Seon Woo-seon
She is the youngest daughter of the founder of Queens Group and her husband is the company president of Queens Food.
She married her husband under an arranged marriage set up by her parents to solidify the merger of her in-laws company with her familys company. They have no sex in their marriage. At home, her husband shows no interest in sex but he carries on multiple affairs. So So-hyun has a sixth sense for sniffing out cheating husbands.
After having had enough of her husbands infidelity, she shocks her husband with an explicit ultimatum.
She tells him that shell have a torrid affair with one of the employees that work at his company.
One day, she catches sight of an attractive employee at her husbands company. He is no other than Ohn Dal-soo, a former college friend and husband of Ji-ae. Hes her target!

Jang Young-sook (age: 43, Wife of Hong-shik, a company director) / ?
As the wife of the company director, she has a charismatic personality.
Shes also the chairwoman of the Pyeonggang Womens Social Club within the company and the most powerful woman among them.
If she dislikes any of the members, then that woman will be ostracized by all of the other members and the husband of that woman will never get promoted as well.
But her rival and archenemy is So-hyun, the wife of the company president.
She finds her to be intolerable because she is younger and shows no respect. She also cant tolerate the way that So-hyun criticizes her in front of the wives of regular company employees. So she is waiting for an opportunity to get even with her.

Ma Tae-joon (age: 35, So-hyuns husband/ company president) / actor Yoon Sang-hyeon
He was very much in love with another woman before he was forced by his parents to marry So-hyun in an arranged marriage. He knew So-hyun since they were kids and never found her adorable or attractive.
Rebelling against his parents, he carries on numerous affairs while married to So-hyun but then...
He finds himself attracted to Ji-ae who is devoted to her husband and will do anything to make him successful.

Kim Hong-shik (age: 47, Young-sooks husband / company director) / actor Kim Chang-wan
He is the company presidents right-hand man and handles all of the company affairs, including the slush fund set aside for bribing politicians. But he also keeps records every impropriety committed by the president.
He plans to blow the whistle one day to force Tae-joon to resign in disgrace.

Kang Joon-hyuk (age: 35, Bong-soons husband/ Senior manager) / actor Choi Cheol-ho
He is very ambitious and aims to reach the top executive passion in the company. He rams through projects through sheer determination.
He was given big promotions for someone of his age. He is a demanding boss who makes employees cower in fear.
Most of the time, he looks heartless and cold.
At first, he looks down at Ji-ae, his first sweetheart, when they meet again but in reality, he finds it hard to control his emotions that he feels for her.

Ohn Dal-soo (age: 32, Ji-aes husband / Unemployed->Salaried worker) / actor Oh Ji-ho
The youngest child in his family. Lacking in determination and willpower. Indecisive.
But he has an excellent memory and gained admittance to Seoul National University, the top university in the nation. Nevertheless, he has a hard time holding onto jobs or even finding one. When Ji-ae threatens to divorce him unless he gets his act together, he takes a job a Queens Food that she picked out for him.

Episode 1
Cheon Ji-ae was the most popular girl in high school and all the boys were smitten by her pretty looks. Dreaming of becoming a modern-day Cinderella, she married Ohn Dal-soo, who was enrolled at SNU Medical School, to live a comfortable life as a doctors wife. But Ohn Dal-soo couldnt stomach Anatomy 101 and later dropped out of medical school. So he spends most of his time with his fellow MENSA members.
After being embarrassed by her old high school friends who are richer than her, Ji-ae comes home to find his husband playing poker with his MENSA club friends. So she tells her husband that she wants a divorce because hes jobless. But the next day, Dal-soo wears a suit and tells his wife that hell submit his resume to Queens Food after he was recommended for a position there by a fellow MENSA member.

Episode 2
Paying a visit to Bong-soons home, Ji-ae find some hope in getting on her friends good side when she sees Bong-soon fretting about the absence of her housekeeper when shes expecting guests soon.
Ji-ae helps Bong-soon with the housework and also cooks foods to win her friend over. But Ji-ae is stunned to learn that the guests that Bong-soon was expecting were no other than their old high school friends...

Episode 3
Ji-ae forces her husband Dal-soo to go to Bong-soons home with her and apologize to Bong-soons husband Joon-hyuk over the incident that occurred at the funeral parlor the day before. When Joon-hyuk bluntly asks them why they came to see him, Ji-ae tells him that they came to apologize but Dal-soo says he isnt sorry and glares at Joon-hyuk.
When Joon-hyuk snickers at Ji-ae for marrying such a loser, Ji-ae gets up and tells him that he might be successful now but there was a time when he got on his knees begging her to be her girlfriend. She also tells him that although its true that she came to beg him to hire her husband, she changed her mind and doesnt need his help any more. With that, she abruptly leaves.

Episode 4
Ji-ae becomes drunk at the company party but she receives a call that Tae-joon is going to the hospital so she runs out of the party. She then tries to hail a cab but the cab drivers avoid her because she looks drunk. While Tae-joon is driving towards the hospital before he goes to the company party, he slams the brakes when Ji-ae jumps in front of his car...

Episode 5
Ji-ae decides to swallow her pride and ask Bong-soon to help her husband get hired at Queens Food so she visits Bong-soon at her home. As Bong-soon is about to leave, she brushes off Ji-ae by saying that if she came to ask for a favor, then her answer is no.

Ji-ae begs Bong-soon to help her husband and offers to do anything for her. Bong-soon relents and orders Ji-ae to hold her golf bag and follow her.

My Wife is a Superwoman | Cast

My Wife is a Superwoman | News

My Wife is a Superwoman | Shopping

My Wife is a Superwoman | Soundtracks, OST (Sponsored)

My Wife is a Superwoman | Pictures

View all 239 pictures for "My Wife is a Superwoman"

My Wife is a Superwoman | Links | Suggest a link

My Wife is a Superwoman | Reviews

My Wife is a Superwoman | Facts

My Wife is a Superwoman | Community